Poll: Republicans to be shut out of Senate general election 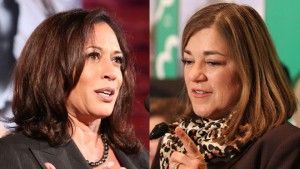 Attorney General Kamala Harris still leads a crowded field in the race to replace Democratic Sen. Barbara Boxer in Washington, with Congresswoman Loretta Sanchez, a fellow Democrat, in a relatively close second, according to a new Field Poll[1].

The state’s primary system pushes the top two candidates into the general election, regardless of party. As it stands now, Republicans will likely be out of the running after next Tuesday when voters submit their ballots.

If Republicans could coalesce around one candidate, they’d have a shot at one candidate making the November runoff. Republican candidates account for 20 percent of the vote among likely voters, with Sanchez, of Santa Ana, polling at 14 percent.

“Republicans probably wish that someone could clear the field and unite the party behind one candidate,” said John J. Pitney, Jr., a Roy P. Crocker professor of politics at Claremont McKenna College. “But nobody has that power.”

Harris leads with 30 percent, having the backing of the California Democratic Party[2]. But a large percentage of respondents are undecided —  27 percent said they either hadn’t made up their minds or are not voting — meaning a lot can happen on Tuesday.

While Sanchez is widely viewed as the more centrist candidate, as one of the few remaining members of the fiscally-conservative Blue Dog Democrat coalition[3], Harris has nearly double the support among those who have declined to state a party preference, 16 percent and 32 percent, respectively.

But neither Harris nor Sanchez are polling well with Republicans, five percent and four percent, respectively. It’s unclear which way voters would lean after June, once the field narrows.

“It’s always a fallacy to extrapolate from a primary to tell what’ll happen in the general,” said Democratic strategist Garry South, who is not working with any of the candidates.

Another poll from last week showed 69 percent [4]of voters prefer someone who “is willing to make compromises to get legislature passed over one who holds true to their beliefs without compromise.”

Despite her liberal philosophy and voting record, Boxer long ago mastered the art of legislating. Even at a time when Congress is getting little done, she managed to broker a deal last year on a highway bill with her ideological opposite, Sen. Jim Inhofe, R-Okla.

Harris does not have legislative experience for voters to draw from. Sanchez has run heavily on her reputation as a dealmaker, having made Congressional Quarterly’s[5] recent list of the 25 most influential women in Washington, for being a “debate shaper and swing vote.”

With her legislative abilities, Sanchez changed how[6] sexual assaults in the military are reported and tracked, thereby increasing accountability and consistently helped secure federal funding for Orange County’s groundwater replenishment system which provides water to millions of residents.

Yet the polls show voters still turning to Harris in larger numbers. South attributed this to Harris’ statewide name recognition, compared to Sanchez’s limited reach to mainly within her congressional district.

“She is a representative of one of the 53 seats in California, nobody knows her in the other 52,” South said, adding that a Democrat on Democrat race in the general could change the dynamic.

Arguably the two most well-known Republicans in the race are two former state party chairmen, Tom Del Beccaro and Duf Sundheim. Ron Unz, who ran for governor against fellow Republican Governor Pete Wilson and is an outspoken critic of bilingual education, seemed to raise his profile substantially during the two debates.

In a state with several expensive media markets and without any noteworthy amount of name ID, the financial shortcomings of the Republican candidates is holding them back.

“Nobody knows who any of them are and none have two nickles to rub together,” said South.

“Even if they could get a GOP candidate into the top two, that person would still lose the general election,” said Pitney. “The GOP leadership has to focus its very scarce resources on races it might win.”