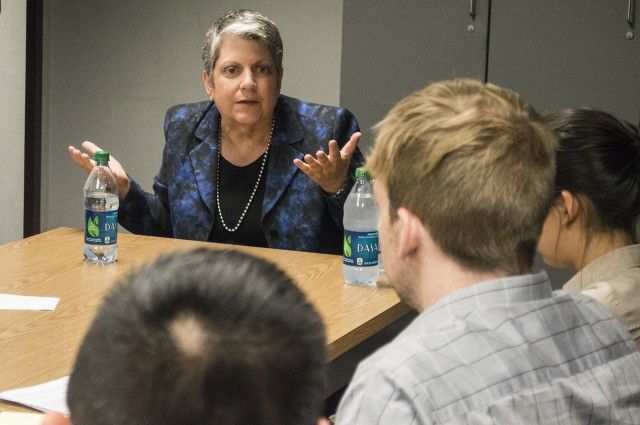 A protracted dispute in California about education funding for the UC system has sharpened over a new bill in Sacramento that would require big new hikes in tuition for out-of-state students.

Assembly Bill 1711, introduced by Assemblyman Jose Medina, D-Riverside, sailed through the Assembly, reflecting a broad-based reaction to a brutal audit of the UC’s revenue practices. “State Auditor Elaine Howle found that UC was enrolling a higher number of less-qualified nonresident students to boost revenue at the expense of California students,” the Sacramento Bee reported[1]. “According to the report, nonresident enrollment exploded by 82 percent between the 2010-11 and 2013-14 academic years. The report further stated the UC system didn’t do enough to cut budgets before turning to recruiting out-of-state students.”

What’s more, over a broader 10 year stretch, “admissions of out-of-state undergraduate students soared 432 percent, a period in which in-state admissions only increased 10 percent,” as the U-T San Diego editorial board observed[2]. “More than 4,000 California students ‘whose academic scores met or exceeded all of the median scores of nonresidents whom the university admitted to the campus of their choice’ were denied admission to UC,” according to Howle’s report.

Medina’s bill would open up 30,000 additional spaces for in-state students at the University of California system over a period of six years. “To offset the lost revenue, the bill would raise out-of-state tuition to more than $54,000, a price few can afford,” as KCRA Sacramento noted[3].

Not just out-of-staters but out-of-country students have wound up in the policy hot seat. In fact, California has become a focal point for national candidates seeking a handle on the populist vote this election season. Campaigning in California, for instance, Hillary Clinton recently threw her support behind the bill, telling voters gathered at a Mexican restaurant she approved of limiting the number of foreign students. “[W]e have got to get back to using public colleges and university for that they were intended,” said Clinton, according[4] to CNN. “If it is in California, for the children in California. If it is in New York, for the children in New York.”

Yet the University of California’s reliance on out-of-state and foreign tuition has not grown as severe as other state schools. “Students from other states and countries have flooded into the UC system’s campuses since the recession, smoothing over gaping budget holes with their tuition payments,” the San Jose Mercury News allowed[5]. “Although they are a much smaller proportion of the UC student body than at the University of Michigan, where about 43 percent of new freshmen hail from out of state, nonresidents now make up 21 percent of last fall’s freshman class, up from 7 percent just five years earlier and about 15.5 percent of all UC undergraduates.”

Despite the strong push for change, opposition within the UCs themselves has begun to mount: “The sweeping proposal has alarmed university leaders and some students, who fear it will cause further budget instability and spur talented students from other states and countries, an integral part of campus life, to go elsewhere,” the Mercury News detailed. “In three years, UC’s out-of-state tuition would surpass what Stanford currently charges: $45,729. Including housing, campus fees and other expenses, the annual cost of education for UC’s out-of-state students would approach $70,000 by 2019.”

In an effort to stave off criticism, UC President Janet Napolitano — who not long ago went to the wall in extended negotiations over tuition issues with Gov. Jerry Brown — released[6] a substantial statement. In keeping with her protective posture toward the UCs, Napolitano sought to portray the schools as doing what it took to withstand serious financial pressure amid policy uncertainty.