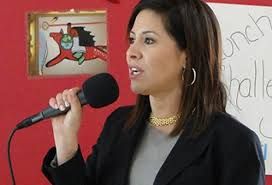 In deciding which small business from her district should win an award for “Small Business of the Year,” Assemblymember Nora Campos didn’t have to look far.

The San Jose Democrat chose Voler Strategic Advisers, a fledgling political strategy firm that has held a fundraiser for her and employs both her brother, Xavier, and a longtime political consultant, Rolando Bonilla.

No money comes with the award, just recognition. It’s something a business can then use to post on its Facebook page[1]: “It is an honor to be recognized as Small Business of the Year for our region.”

Every state legislator nominated a company from their district. The award ceremony was last month in Sacramento[2], hosted by the California Small Business Association.

Details on Voler are hard to come by since its webpage is “Coming soon[3],” but Linkedin shows Bonilla is the chief strategy officer and Xavier Campos is senior vice president, government strategy and land use[4].

Bonilla served as Campos’ communications director[5] for three years while she was still a San Jose city councilwoman.

Voler was actually started less than a year ago, according to San Jose Inside[6], which first reported the story. It has less than 300 likes on Facebook and only 37 Twitter followers.

In May, Voler held a fundraising event for Campos’ 2020 Senate campaign committee (she has one for 2016 as well), according to campaign finance disclosures.

Campos is termed out of the Assembly and is challenging fellow Democrat Jim Beall in the Senate. On Tuesday, she advanced through the primary with the second-highest vote total behind Beall, who she has accused of “bullying” her[7].

Xavier Campos was also a San Jose councilman. But he was voted out of office in 2014 following a rocky term, which The San Jose Mercury News[8] characterized as “marred by a campaign win aided by illegal campaign mailers, his refusal to testify to even basic facts in a friend’s criminal trial, and his past as an executive in a nonprofit that raided employees’ pension funds.”

“Campos was not criminally charged in any of the scandals, but his reputation had been battered by the end of his four-year term,” added The Mercury News.