Republicans in Legislature poised to increase diversity in 2016 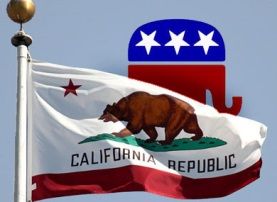 Buried beneath the headlines of Donald Trump’s comments of the day and the relatively new top-two primary format that weeded out Republicans[1] from a statewide partisan race for the first time ever rests one nugget of good news for the California GOP.

With a little luck at the ballot box, Republicans in the Legislature are set to expand on their increasingly diverse delegation, a far cry from the “Party of Old White Men” it’s been thought of by some for years.

And while Republicans have the primary goal of holding the relatively few seats in the Legislature they already have, increased diversity would show a modernizing party that could expand is electoral appeal.

“Our party does not engage in the identity politics of the left, but we have placed an emphasis on recruiting and supporting the best candidates for every district,” said CAGOP Vice Chairwoman Harmeet Dhillon. “In our culturally rich state, that candidate is often someone with a minority background.”

In a district that includes much of Bakersfield, termed-out Republican Shannon Grove appears set to be replaced by Vince Fong, of Chinese descent. Fong won the primary with 60.8 percent of the vote in the largely Republican district.

Dante Acosta is poised to replace termed-out Republican Scott Wilk in a Republican-leaning district that includes Simi Valley and much of north Los Angeles County.

Acosta, of Mexican descent, came in second in the primary behind Democrat Christy Smith, who won 44.8 percent to 35.9 percent. However, Acosta split a majority of votes among two other Republican candidates.

In a largely Republican Orange County district, termed-out Don Wagner may be replaced by Harry Sidhu, who came to the United States in 1974 from India. Sidhu split a 67 percent majority of the vote among six Republicans and came in second behind the lone Democrat.

Assemblywoman Ling Ling Chang, who was born in Taiwan, is running to replace Bob Huff, the only termed-out Senate Republican, in a competitive district that straddles Orange and Los Angeles counties. Chang faces longer odds than the others, as she advanced to the general with two Democratic candidates splitting a 55 percent majority of the vote.

If Chang does win, she’d increase diversity in the Senate Republican caucus. And filling her seat in the Assembly could be Philip Chen, of Chinese descent. Chen, like Acosta and Sidhu, was the second-place finisher in the primary behind a Democrat, splitting the vote with four Republicans in the Republican-leaning district.

“As an immigrant myself, I am proud to see more and more Republican candidates that other Californians with diverse backgrounds can identify with when they visit the polls,” said Dhillon, who was born in India. “This trend increases voter turnout and enthusiasm.”

Does it even matter?

California is a huge state, filled with diverse pockets. It’s often said that as the demographics of the state changed, the Republican Party failed to keep up.

Since becoming CAGOP chairman in 2013, Jim Brulte (along with Dhillon and other party leaders) has tried to change that trend in candidate recruitment. As he said in 2015[2]: “In a neighborhood election, the candidate who most looks like, sounds like, has the shared values and shared experiences of the majority of the people in the neighborhood tends to win.”

In 2014, California Republicans sent a relatively large delegation of women to the Legislature, with a large Asian bloc that included Chang. In 2016, they’ll aim to expand on that with Acosta, Chen, Sidhu, Fong and Chang.

“Under the leadership of Jim Brulte, California Republicans have done yeoman work in recruiting candidates who look like their constituents,” said John J. Pitney, Jr., a Roy P. Crocker professor of politics at Claremont McKenna College. “It’s a smart move: monochrome does not fit California, and in the long run, this strategy could help the party rebuild its strength.”

But, Pitney cautioned, the effect Trump — the presumptive nominee who has a tendency to say things sometimes rightly and sometimes wrongly viewed as racist — will have at the top of the GOP ticket is unclear.

“The problem is that people tend to see political parties through the prism of presidential candidates,” Pitney said. “Trump could ruin much of California GOP’s progress.”