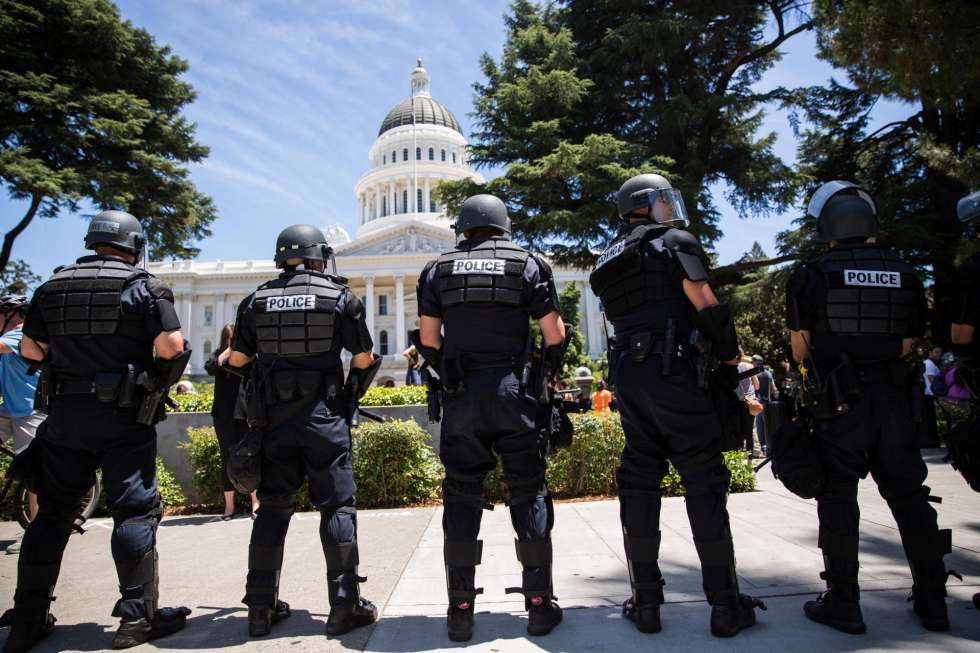 A group tied to the neo-Nazi and white supremacist movements found itself at the center of a bloody political firestorm in Sacramento, heightening election-year populist and nationalist tensions. A few dozen members of the Traditionalist Worker Party did battle with left-wing antagonists from a counter-protesting group many times larger in size, the Los Angeles Times noted[1].

“The incident may fuel concerns about the potential for violent protests outside the major party conventions in Cleveland and Philadelphia this summer and in the run-up to the Nov. 8 presidential election,” Reuters suggested[2].

The aims of the Traditionalist Worker Party have raised alarm among anti-hate organizations who track fascist and racist groups around the country. “We reject anti-white social engineering projects like forced busing, the ‘disparate impact’ shakedown racket, and the numerous other ways that our government is stacking the deck against white families,” the TWP platform reads, according[3] to The Advocate.

But observers have noticed that the street battle mirrored the dynamic of a similar riot in Southern California, which far-right protesters did not instigate either. “The Sacramento stabbings came several months after another violent confrontation between members of a Ku Klux Klan group and counter-protesters at an Anaheim park,” the Los Angeles Times noted. In that ordeal, five out of 12 protesters arrested were let go “after police determined that they were acting in self-defense against counter-protesters,” the Orange County Register reported[4]. Some conservatives groups have alleged that the unrest is part of a calculated plan by far-left organizations to foment violence.

Although the Klan group, like the far-right group in Sacramento, has been suspected of willingly courting attacks, counter-protesters in both cases appeared to have planned for a bloody encounter in advance. “When six Klansmen pulled up in a black SUV about noon Saturday, about 30 counter-protesters were there waiting for them, police said,” according to the Register. CHP Capitol Protection Service spokesman George Granada told Reuters that, in Sacramento, “counter-protesters immediately ran in — hundreds of people — and they engaged in a fight.”

Trump supporters have pointed to the similarities as evidence that violence at their candidate’s rallies comes more from outside sources than from Trump fans themselves. “In recent months Trump has blamed ‘professional agitators’ and ‘thugs’ for violence that has broken out at many of the Republican candidate’s rallies,” Reuters added. “In Albuquerque, New Mexico, last month, anti-Trump protesters threw rocks and bottles at police officers who responded with pepper spray. A month earlier, some 20 demonstrators were arrested outside a Trump rally in Costa Mesa, California.”

But the Trump campaign appeared not to have anticipated that the TWP would respond to their newfound fame with a pledge to provide volunteer security at the Republican nominating convention in Cleveland.

Spokesman Matt Parrott told[5] McClatchy some 30 members planned to “show up and make sure that the Donald Trump supporters are defended from the leftist thugs.”

Republican worries over the tenor of the Cleveland event grew as far-right interest has increased and mainstream interest has diminished. “With the convention less than a month away, POLITICO contacted more than 50 prominent governors, senators and House members to gauge their interest in speaking,” the Beltway newser reported[6]. “Only a few said they were open to it, and everyone else said they weren’t planning on it, didn’t want to or weren’t going to Cleveland at all — or simply didn’t respond.”
Endnotes: