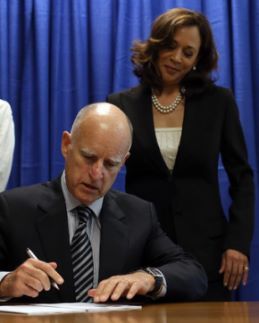 Proposition 57 — the newly numbered[1] November “parole reform” ballot measure championed by Gov. Jerry Brown — has already proven controversial. The measure was revised and expanded dramatically late in the authorization process. The California Supreme Court gave its blessing to the maneuver, but a dissent implicitly likened [2]the maneuver to the “gut-and-amend” practice used by the Legislature with hollowed-out bills in the final days of most summer sessions.

Now a much more relatable, explosive controversy looms over the proposed state constitutional amendment — one that threatens its passage and could buffet the U.S. Senate campaign of state Attorney General Kamala Harris and damage Brown’s reputation.

The ballot argument that Harris accepted for Brown’s measure depicts it as a benign proposal to bring common sense to parole decisions by allowing “parole consideration for persons convicted of nonviolent felonies upon completion of full prison term for primary offense.”

But according to the California District Attorneys Association, the list of “nonviolent felonies” touted by Brown and accepted by Harris includes crimes of sexual violence[3] — specifically the ones committed by then-Stanford athlete Brock Turner when he sexually violated a passed-out fellow student in January 2015. This screen shot from the CDAA website gives specific examples.

This is unlikely to sit well with the vast cross-range of people who are furious with Santa Clara County Superior Court Judge Aaron Persky’s decision in early June to sentence Turner, formerly a member of the Stanford swim team, to six months of imprisonment — much less than the six years sought by prosecutors.

The ruling quickly gained national and international attention[4]. The letter [5]Turner’s victim wrote to him became an Internet sensation. Judge Perksy faces an unprecedented campaign from Bay Area residents who vow to never serve[6] as jurors in his courtroom. Citing the Turner case, members of the California Legislature have moved to toughen sexual assault laws[7].

The Proposition 57 debate seems likely to eventually merge with the debate over the fairness of Brock Turner’s sentence and whether sexual assault laws should be made much tougher. So far, at least, leaders of the California District Attorneys Association have hesitated to make an explicit connection between the two matters.

But that seems likely to change in coming months when Brown uses his hefty campaign war chest[8] to push his agenda. The Brock Turner case appears to be tailor-made for district attorneys who complain that the media didn’t read the fine print on the governor’s initiative before their initial coverage [9]of it early this year.