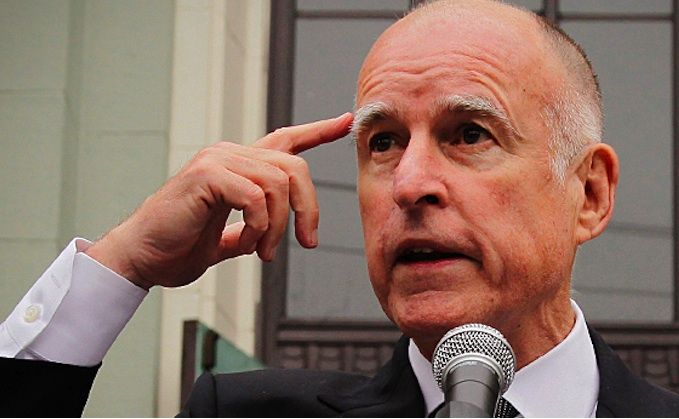 New legislation on guns was signed by Gov. Jerry Brown and advanced on Capitol Hill, as California elected officials continued a concerted push for tighter regulations at both the state and federal level.

To the satisfaction of state Democrats, Gov. Brown “signed six gun-control bills into law, including new restrictions on semi-automatic rifles and a requirement that ammunition purchasers undergo background checks,” according[1] to the Los Angeles Times, “saying they will help ‘enhance public safety’ in California.” But Brown also scrapped five more bills that would have cracked down further, “including an expansion of the use of restraining orders to take guns from people deemed to be dangerous.” Brown also rejected language that would expand the definition of firearms, warning against the potential for wide-ranging unintended consequences.

“The action appeared to be a subtle shift for Brown, whose complicated record on gun control has been marked by skepticism about whether many proposals increase public safety without infringing on the rights of law-abiding gun owners.”

Opponents of the new measures, who bitterly objected to the flood of new rules, remained unswayed by the vetoes. “Brown’s decision to veto almost as many bills as he signed did little to pacify outraged pro-gun groups that believe the measures were improperly rushed through the legislative process in the wake of the San Bernardino and Orlando massacres,” the San Jose Mercury News observed[2]. “One reason was that the governor signed the most controversial bills.”

Another was the stark divide between Republicans and Democrats on the scope of Second Amendment protections for individual private buyers of firearms and ammunition. Although the U.S. Supreme Court has upheld a personal right to private ownership, constitutional law grants states and localities a fairly wide berth on how freely available to make guns and bullets.

Democrats to Brown’s left have already shifted focus to the November elections, when Californians will have the opportunity to vote back in much of what the governor left out. “A separate set of gun control measures will appear before voters in November; some of them have been passed by the Legislature, but Mr. Brown vetoed those, saying they should be left to voters to decide,” the New York Times noted[3].

“That initiative is being championed by Lt. Gov. Gavin Newsom, a Democrat who is running for governor after Mr. Brown’s final term ends in 2018. His initiative would, among other things, make firearm theft a felony and require ammunition vendors to report lost or stolen supplies within 48 hours.”

The party has faced slower going in Washington, D.C. As Newsweek observed[4], “national Democrats and Republicans continue a political battle over the proper response to the spate of mass shootings, with Republicans bending to possibly accept some gun control curbs but unwilling to agree with the extent of Democrats’ proposals. Frustrated Democrats resorted to a talking filibuster and a Congressional sit-in to force the issue in recent weeks, but Congress remains stalled.”

Democratic Gun Violence Prevention Task Force chief Rep. Mike Thompson, D-St. Helena, insisted that the alternative to proposed legislation tying gun access to the so-called terror watch list was a bill “drafted by the gun lobby,” as the Los Angeles Times reported[5] separately, with Rep. Mark Takano, D-Riverside, characterizing the bill as “a fig leaf to cover up Republicans’ refusal to take any meaningful action on gun violence.” Republicans have countered that the watch list, notorious for bureaucratic mix-ups and overbroad application, would add due process problems to other gun strictures they already oppose. Rep. Tom McClintock, R-Elk Grove, lambasted the Democrats’ recent sit-in as “one of the most disgraceful and childish breaches of decorum in the history of this institution,” the Times added.