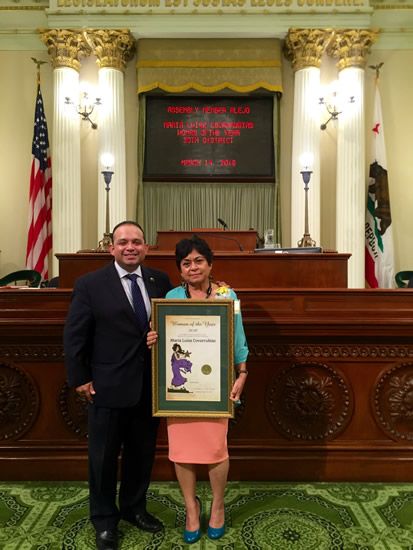 Alejo honors his mother Woman of the Year. Courtesy of Alejo’s office.

At a time when voters are increasingly convinced the system is rigged, some state legislators are making that perception worse by giving district-wide awards to their family members, critics say.

While it’s not uncommon for legislators to participate in award ceremonies recognizing constituents for their accomplishments, it’s becoming more common for those honorees to be friends and family members of the legislators.

In March, members of the Legislature honored women from their districts to be Woman of the Year: Assemblyman Luis Alejo picked his mother. In May, Assemblywoman Nora Campos selected as Small Business of the Year[1] a brand new political strategy firm both her brother and her longtime political consultant work for, which had also held fundraisers for her. And just a few weeks ago, Assemblywoman Lorena Gonzalez picked her boyfriend, Nathan Fletcher, a former state legislator, to be Veteran of the Year.

“These ‘awards’ are a generally cost-free technique for buying some goodwill in the community,” said John J. Pitney, Jr., a Roy P. Crocker professor of politics at Claremont McKenna College. “Generally, they are harmless, but when lawmakers give them to their relatives, friends and squeezes, they just contribute to the sense that the political system is rigged.”

“We already have a surplus of cynicism, and this nonsense makes it worse,” Pitney said.

This was the first year Campos, a San Jose Democrat, chose to participate in the Small Business of the Year award, selecting Voler Strategic Advisors, which had been in business less than one year and does not have a working website[2].

The same month the award was given, Voler held a fundraiser for Campos’ Senate campaign — Campos is challenging Sen. Jim Beall, a fellow San Jose Democrat.

“This is absolutely not the spirit of the award,” said Samantha Toccoli, legislative coordinator for the California Small Business Association, one of the groups in charge of the program.

California Small Business Day was created by an Assembly resolution in 2000. Toccoli said she was unaware of any familial relationship between Campos and Voler and added that the organization is run by volunteers who have no way of efficiently vetting every honoree.

“I would hope that this reflects on the legislator and not the integrity or intention of our organization and the 25 other organizations that host the event,” Toccoli said.

A Campos spokesperson countered that the award was technically given to Voler’s owner, not Campos’ brother, Xavier, who is a senior vice president, or her longtime political consultant and former communications director, Rolando Bonilla, who is Voler’s chief strategy officer.

For Alejo, a Watsonville Democrat, it’s his last year in the Legislature, having been termed out and elected to the Monterey County Board of Supervisors — he said he “could not think of anyone better” for the award than his mother, Maria Luisa Alejo Covarrubias.

“I wanted to honor my mother during my last year in the state Assembly,” Alejo said in a statement at the time. “Our mothers are our first teachers and made us who we are today. My mother has done so much for my family and for our local communities, and I could not think of anyone better for this year’s Woman of the Year for Assembly District 30.”

Because Gonzalez’s boyfriend is a former legislator, her awarding Fletcher was more conspicuous than the two prior examples. On Instagram, Fletcher said[3]: “Honored to be chosen as Veteran of the Year by my Assemblywoman:)”

San Diego Republicans blasted Gonzalez[4], a San Diego Democrat, for choosing her boyfriend, which she defended on Facebook by highlighting Fletcher’s work with veterans, by denouncing the attacks as partisan and by blaming the media. She pointed out that others, including Republicans, had done the same.

“It is well known that Nathan and I are in a committed relationship, but there is a long line of assemblymembers who have picked husbands, wives, fathers, mothers and other relatives for recognition,” Gonzalez wrote[5]. “Never once has it been questioned.”

Not who it is but how it looks

But the question isn’t so much whether Fletcher or any of the others are deserving of the awards, it’s a question of what message these actions send to the public, which is already weary from the perception of widespread double standards and cronyism.

“These examples reflect poorly on the Legislature,” said David Wolfe, legislative director for the right-leaning Howard Jarvis Taxpayers Association. “We need to ask if the awards program as a whole is in the best interest of California taxpayers.”

“If the Legislature truly desires to honor [taxpayers] it should rededicate the hours that they currently spend on pomp and circumstance shows like these and instead focus on fixing real problems, like our state’s $500 billion unfunded pension liability,” Wolfe said.

So far, the three incidents are isolated to Assembly Democrats and it’s unclear if Speaker Anthony Rendon, D-Lakewood — who waited more than two months[6] to take action against a committee chairman accused of domestic violence and under a temporary and then three-year restraining order — will ask fellow legislators to abstain from taking actions that give the appearance of cronyism.