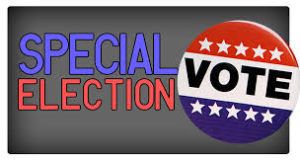 Gov. Jerry Brown vetoed a bill on Monday that would have allowed him and his successors to cancel a special election if there is only one candidate.

Brown was concerned that while there may be only one candidate officially running, there are often one or more write-in candidates running as well.

“In the situation envisioned by this bill, potential write-in candidates would be excluded from participating in the election,” Brown wrote in the veto message[1]. “That doesn’t seem consistent with democratic principles that call for choice and robust debate.”

The bill was sponsored by Sen. Sharon Runner, R-Lancaster, who died earlier this month[2], ending a longtime battle with scleroderma. Runner was elected in a special election last year with 94.1 percent, with six write-in candidates splitting the remainder of votes.

The Runner election cost Los Angeles and San Bernardino counties almost $1.7 million total. Had it been signed into law, the Runner bill would have allowed Brown to cancel a special election and declare an officially unopposed candidate like Runner the winner.

Legislators have long looked for a way to ease the burden and costs of special elections on counties and voters. A CalWatchdog investigation[3] earlier this year showed that counties have spend around $21.7 million on special elections replacing state lawmakers since 2013.