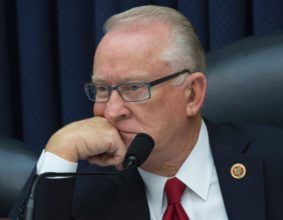 In her gambit to ride largely Latino and Republican support to the U.S. Senate, Democratic Congresswoman Loretta Sanchez picked up another high-profile endorsement on Thursday: Buck McKeon, the former Republican Congressman from Santa Clarita.

McKeon and the Orange County Democrat served together in the House of Representatives from 1997, after Sanchez was elected, to 2015, when McKeon retired. For six years, McKeon was the top Republican on the House Armed Services Committee, which Sanchez still sits on.

“I have worked closely with Loretta for many years and have seen firsthand her ability to put partisanship aside and work with Democrats and Republicans to help move policies forward that better protect our troops and the homeland,” McKeon said in a statement. “Her military knowledge and committee experience is needed in the Senate.”

Because of her longtime seat on the Armed Services Committee, many of Sanchez’s biggest accomplishments have been military related, including changing how sexual assaults are treated in the military.

Sanchez hopes to win the Senate seat being vacated by Democrat Barbara Boxer with a coalition of Latinos, Republicans, independents and the leftover Democrats who don’t support the establishment candidate[1] and front runner, Attorney General Kamala Harris.

Harris led Sanchez in the primary, 40 percent to 19 percent, with the results split among 34 candidates. Polling since has consistently shown Harris with a comfortable lead.

Of her four key voting blocs, Sanchez only leads among Latinos. Harris leads among Republicans, independents and Democrats.