When it comes to tainted water supplies, is Fresno another Flint, Michigan? The evidence is worrisome enough that authorities in California’s fifth-largest city have brought in outside experts to take a close look while overhauling city water practices.

Problems were first publicly revealed in January after public complaints about discolored water. This led Fresno officials to review how the city dealt with complaints and whether it had complied with laws requiring water issues be reported to state regulators.

This review led to a grim discovery: A former city water official kept hidden several hundred complaints from about 2004 to 2011, raising the prospect that thousands of young Fresno residents among the city’s half-million population may have been exposed to lead poisoning growing up, which can cause cognitive problems[1] that persist for a lifetime. 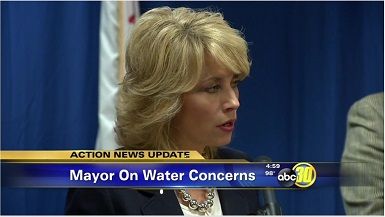 Mayor Ashley Swearengin, City Manager Bruce Rudd and public utilities director Thomas Esqueda outlined what they had found at a grim news conference last week. They said Robert Moorhead — who ran the water plant in the northeast part of Fresno where water complaints have been most common — had kept complaints to himself on his private computer and personal cellphone.

By law, Moorhead was required to pass along the complaints to the State Water Resources Control Board. City officials said he was also supposed to inform his boss, at the least. Instead, he kept quiet about an estimated 150-200 annual complaints for seven years until his firing for undisclosed reasons in 2011. The reason for his silence may have been his apparent failure to make repairs to his water plant in 2005 despite direction to do so from his boss.

Moorhead, however, told local media that he was being made a “scapegoat”[2] for decisions made above his pay grade. He said he was responsible for the water plant, not water distribution, and that he had done his job well.

Lead contamination in 18% of examined homes

The revelations have triggered alarm in the city’s northeast neighborhoods. So far, the city has found evidence [3]of lead contamination in 51 of the 280 homes it had inspected as of late July — about 18 percent. The problem has been fixed in 11 homes.

Problems in Flint appear far worse. A federal state of emergency was lifted [4]Sunday for the Michigan city, but problems with water supplies remain, and there is vast public anger over a contamination problem that began in April 2014 when local officials began using cheaper water from the polluted Flint River instead of water from Lake Huron delivered by the city of Detroit’s water department 70 miles to the south. Up to 45 percent of households in the city of 100,000 had water with dangerously high levels of lead. There are also concerns about children exposed to lead in water at local schools. Nine officials face criminal charges[5] for not disclosing the problem.

The state of emergency was lifted after Virginia Tech researchers reported considerable improvement.

One of those researchers, Marc Edwards, along with Vernon Snoeyink of the University of Illinois are leading the independent investigation of Fresno’s water woes.