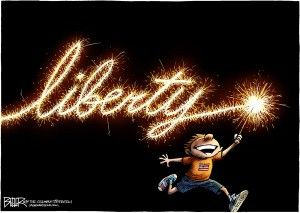 When it comes to liberty, California is one of the most restrictive states on its citizens, according to a new study[1].

The Cato Institute, a libertarian think tank, in its “Freedom in the 50 States” report divided liberty into three categories: personal, fiscal and regulatory. And while the Golden State ranked high (16th) in personal liberty, it was near the bottom in fiscal (46th) and regulatory (48th).

Overall, New Hampshire ranked the highest. New York was the only state with a lower overall liberty score than California.

For context, Cato defines libertarianism, in part, as “the belief that each person has the right to live his life as he chooses so long as he respects the equal rights of others.” And while the data used to compile the score gives a good snapshot of life in the state, many of the metrics used are sure to be viewed differently from person to person.

For example, gun “rights” account for more than 3 percent of the total score — and while the study sees gun-control measures as a threat to liberty, many Californians view restrictions on firearm usage and access as a necessity. But the study’s guiding principal is based on how governmental policies and regulations affect an individual’s ability to make his or her own decisions.

“In the American system, even ‘benefit to others’ cannot justify trampling on certain freedoms,” wrote the study’s authors. “Books may not be banned simply because the ideas and arguments they present offend some readers. Racial segregation would be unjustified even in the unlikely event it were somehow considered efficient. Likewise, state and local governments ought to respect basic rights and liberties, such as the right to practice an honest trade or the right to make lifetime partnership contracts, whether or not respecting these rights ‘maximizes utility.'”

The most heavily weighted category in personal liberty is incarceration, where California ranks 12th — a steady improvement since 2010 as incarceration and drug arrest rates have fallen.

California was tied for first with many states for marriage equality and ranked high in cannabis and alcohol liberty, but middle of the road in tobacco restrictions. The state ranked low in terms of school choice under the belief that taxpayers paying for public schools should have some freedom to choose where their children go.

Meanwhile, government employment in the state is actually well below the national average.

Regulatory freedom is where California scores the worst of the three categories. Land use is the highest-weighted category in regulatory policy, and it includes eminent domain rules and renewable portfolio standards for power companies, as well as smaller factors.

The study makes several suggestions on how to improve the state’s freedom score, which are included here: