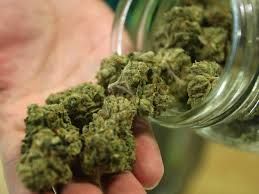 This November, California voters will vote on Proposition 64[1] and decide whether their state should become the third after Colorado and Washington to make it legal under state law for adults to smoke pot recreationally.

But advocates of legal recreational marijuana use in the Golden State and everywhere in the United States got a sharp reminder last week that the federal government reserves the right to have the final say on whether legal pot is OK at the state level. The U.S. Drug Enforcement Administration brushed aside years of lobbying and ruled that marijuana would remain illegal[2] — still considered a Schedule 1 substance under the Controlled Substances Act and formally classified as having no medical use.

Though the federal government continues to pursue charges against some individuals and some high-profile dispensaries — such as Oakland’s Harborside Medical Center — the Obama administration has said it will not attempt to overturn state marijuana laws. But any future administration could take punitive actions against states with laws allowing recreational or medicinal use, suing in federal court, withholding federal grants or more.

However, a new federal court ruling offers some reassurance that no federal authority can pull the plug on state-approved medicinal pot use, at least.

In a case involving 10 pending prosecutions in California and Washington state, the San Francisco-based 9th U.S. Circuit Court of Appeals issued a ruling [3]Tuesday that said the U.S. Justice Department cannot target marijuana growers, suppliers or users in cases where the drug is being used for medical purposes.

The decision — written by a conservative Reagan appointee, Diarmuid O’Scannlain — cited language included by Congress in budget resolutions that bans federal interference with state medicinal marijuana laws. The language was first inserted into budget measures in 2014. So long as Congress continues to renew the ban on federal action — which has bipartisan support — medical users are protected.

The Obama administration had argued that using federal laws to target medical marijuana users or suppliers wasn’t an intrusion on state law. O’Scannlain disagreed: “If the federal government prosecutes such individuals, it has prevented the state from giving practical effect to its law.”

A U.S. Justice Department official said no decision had been made yet on whether to appeal the ruling, which mirrored the finding in a previous case decided last year by U.S. District Judge Charles Breyer of San Francisco.

California became the first state to legalize medicinal use of marijuana with Proposition 215[4] in 1996.