Who will Gov. Brown believe: MADD or DMV? 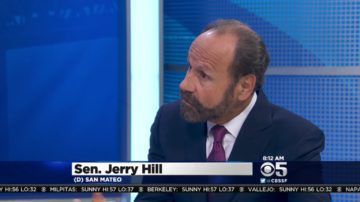 Who will Gov. Jerry Brown believe: the Mothers Against Drunk Driving or his own Department of Motor Vehicles?

That’s what it boils down to when Brown decides whether to sign Senate Bill 1046, a bill by Sen. Jerry Hill, D-San Mateo, that’s touted as a crucial tool in keeping drunken drivers off California’s roads and highways.

The measure would require drivers convicted of DUI to purchase and install “ignition interlock” devices in their vehicles. The devices include a breathalyzer. If an unacceptable level of alcohol is detected on a driver’s breath, his or her vehicle’s engine is disabled. First-time offenders would have to install the devices for six months, with longer mandates for subsequent DUI convictions.

Hill and MADD say similar laws in 28 other states have a long track record of deterring drunken driving and reducing recidivism. While lawmakers balked in previous sessions at such a measure, this time opposition evaporated. The bill passed the Assembly 79-0  and the Senate 39-0.

The unanimous votes came despite DMV concerns. In a June report, agency officials said a test program in four counties — Los Angeles, Sacramento, Alameda and Tulare — with about a third of the state’s population arguably deterred new DUI cases but led to a significant increase in accidents among drivers whose vehicles were equipped with ignition interlocks. The increase was determined by comparing the accident rates among drivers with the devices and drivers with suspended licenses who drove illegally.

Hill blasted[1] the report to a home-district newspaper as being based on shoddy statistical analysis. But the DMV questioned Hill’s reasoning in turn, saying it was not clear that his bill — which ends automatic suspensions of driving rights for some first-time DUI offenders — was the best way to deal with the issue. The agency asserted[2] that such automatic suspensions, which began in 1990, correlated strongly with a long-term drop in DUI recidivism.

A smarter approach, the DMV said, was to “convene a task force including representatives from the Legislature, judiciary, law enforcement, and other public agencies to develop recommendations for strengthening components of California’s comprehensive DUI countermeasure system.”

The California Attorneys for Criminal Justice also opposed Hill’s bill, saying it would take away discretion in sentencing from judges.

Frank Harris, MADD’s director of government affairs, said critics shouldn’t block a change that he depicted as certain to save lives. “Interlocks are much more effective than just hoping for the best with license suspensions,” Harris told[3] the San Mateo Daily Journal. “MADD welcomes further studies, but that shouldn’t be a reason to hold up a life-changing bill and put forth a better policy for society.”