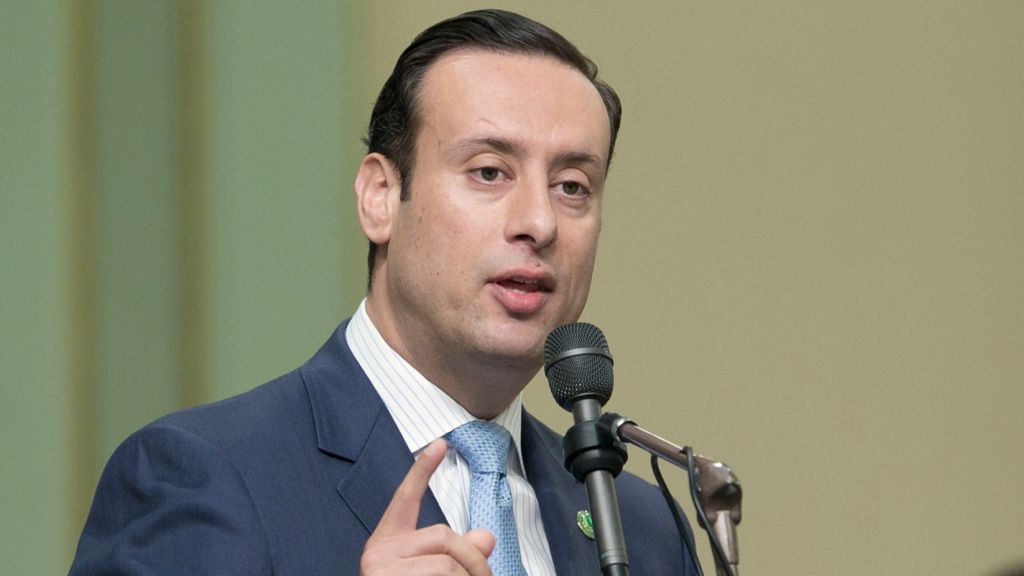 Over the last few days of the session, legislators pay tribute for their fellows who will not be in the chamber next year.

And while the tributes range in length and tone — one legislator joked (?) about his romantic feelings for Assemblywoman Nora Campos — none were as awkward as the one for termed-out Roger Hernández, who was recently placed under a restraining order from his now-ex-wife and was subsequently stripped of his committee assignments.

Assemblywoman Lorena Gonzalez, D-San Diego, was the first of around a half dozen Democrats to pay kind words to the West Covina Democrat, whom she had known since election night 2000.

“This body will miss your work,” Gonzalez said.

Remember when he stole a member’s mic?

Gonzalez opened her remarks with a joke about Hernández’s relationship with Assemblyman Matthew Harper, R-Huntington Beach. Last July[1], Hernández had security remove Harper’s microphone at a committee hearing on increasing the minimum wage after repeatedly talking over Harper and calling a vote to end debate. Videos suggested that even the clerk and deputies seemed confused by Hernández’s requests.

“Seargents have already turned off Mr. Harper’s microphone, so we’re going to do OK,” Gonzalez said.

Harper declined to speak on Wednesday when jokingly asked.

Assemblywoman Shirley Weber had the most awkward exchange with Hernández, however, when she said she was “proud” to see how he’d handled himself over the past year.

In April, Hernández was placed under a temporary restraining order from his then-wife, Susan Rubio, after allegations of domestic violence surfaced during divorce proceedings.

Rubio alleged Hernández assaulted her 20 times over a three-year period, detailing eight alleged incidents[2] in court that included being choked with a belt, being beat with a broom while on the ground and being threatened with a knife after having been accused of an affair.

Hernández has not been charged with a crime but was placed under a three-year restraining order earlier this summer. Hernández has denied the allegations, and even compared Rubio[3] to former Olympic ice skater Tonya Harding, who hired a thug to whack the knee of another skater, Nancy Kerrigan.

It’s not the first time Hernández was in trouble. In 2012, an ex-girlfriend accused him[4] of domestic violence, although charges were never filed. That same year, Hernández was arrested for drunk driving in a state vehicle[5], but was acquitted by a jury on one charge, while the jury was hung on another. And in 2015, allegations of political money laundering[6] against Hernández were dropped by the Fair Political Practices Commission after two key witnesses were unable to testify — one had serious medical issues while the other passed away.

Weber added that she thought of Hernández as courageous on tough issues, a man of “tremendous love and respect” and reiterated her appreciation for his toughness during his personal turmoil. Hernández recently dropped a bid for Congress amid the allegations.

“Many of us struggle with all the issues of life and we crumble as a result of it, but you did not,” Weber said.