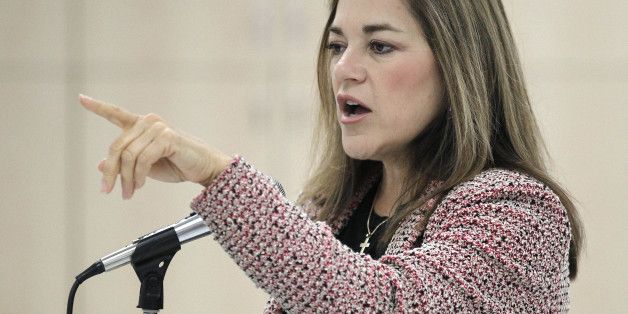 On the heels of a Los Angeles Times story saying she was making a play for voters on the right, Democratic Senate candidate Loretta Sanchez is pushing Gov. Jerry Brown to sign a bill increasing minimum penalties in sexual assault cases.

While the bill received nearly unanimous support in the Legislature — the measure was in response to the Brock Turner case[1], where the former Stanford University swimmer received a few months in county jail and probation after sexually assaulting an unconscious woman — law and order is a basic tenet of Republican ideology.

“All victims of sexual assault deserve equal treatment regardless of socio-economics, education or immigration status,” the Orange County Congresswoman wrote to Gov. Brown. “However, the reality is that the law can and has failed victims by giving well-connected and affluent predators like Brock Turner an advantage with an alumni judge who will neglect the crime and ultimately disregard the victim.”

In the letter, Sanchez also highlighted her work on the House Armed Services Committee, where she pushed for policies that cracked down on how the military deals with sexual assaults.

“As the highest-ranking woman on the Armed Services Committee and the founder and chair of the Congressional Women in the Military Caucus, I understand from testimonies that sexual assault can happen anywhere, anytime and by anyone,” Sanchez wrote.

The Times called it

Earlier Thursday morning, the Los Angeles Times published a story headlined: “Hurting for support in her own party, Rep. Loretta Sanchez tilts her Senate campaign to the right.” Only a few hours later the letter to Brown was released to the news media.

Sanchez has made it no secret that she is hoping to ride a coalition of Latinos, some Democrats, independents and Republicans to victory over the Democratic establishment candidate[2], Attorney General Kamala Harris, who is the frontrunner. There is no Republican in the race as the two women seek to replace Democratic Senator Barbara Boxer, who is retiring.

Sanchez has drawn several high-profile Republican endorsements[3]. And the Times article[4] focused on recent boasting of her record against “Islamic extremists” on a conservative radio show, a recent trip to Shasta Lake (in the deeply red, proposed State of Jefferson) to discuss water issues and a joint appearance at Camp Pendleton with conservative firebrand Darrell Issa, the Vista congressman.

Mark Petracca, chair of the Department of Political Science at UC Irvine, said the play to the right seems “desperate” and is “highly unlikely” to work for fears of Republican undervoting.

“It’s intended to attract GOP voters who do not have a dog in the fight,” Petracca said. “(GOP presidential nominee Donald Trump) is losing the state right now at least handily and there’s no excitement at the top of the ticket to mobilize GOP voters on Election Day. Is Loretta going to get them out to vote for her? Highly unlikely.”

In fact, of all the groups she’s hoping to win, she’s only performing strongly among Latinos, although there’s plenty of time to change that as the campaign ramps up. Harris led among the rest, according to a July poll from the Public Policy Institute of California[5].

However, Sanchez has a history of upsets. Sanchez was first elected to Congress two decades ago after defeating Republican Congressman Bob Dornan, who was heavily favored. But Sanchez walks a fine line now, trying to win Republicans while not alienating Latinos and Democrats in an extremely partisan era when the space between the two sides widens each day.