Despite several big environmental wins during last days of session, one big bill got away 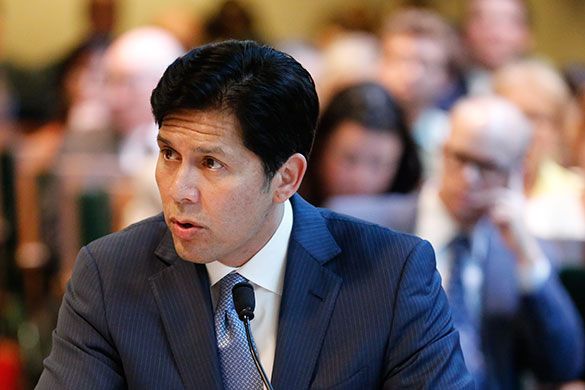 Democrats will walk away from the two-year legislative session that ended Thursday morning with a long list of environmental accomplishments — but still one got away.

And while that probably seems as dull as watching paint dry to nearly everyone who just read it, the measure had major implications for Republicans, local governments, business interests, environmentalists and residents of the broad district that has some of the most toxic air in the nation.

De Leon introduced the board-packing plan[1] shortly after Republicans engineered a takeover of the board, swinging the focus from environmentalists to business interests. In December, the board disregarded SCAQMD staff recommendations and instead adopted rules on refineries backed by the oil industry, and in March it ousted the the longtime director who had been seen as anti-business.

Representatives to the board are local city council members and county supervisors, appointed locally. De Leon’s bill would have added three seats to the 13-member board, appointed by the the Senate Rules Committee (which de Leon chairs), the Assembly speaker and the governor.

During floor debate, proponents argued that the measure was about adding diversity to the almost all-white board that had no Latinos, which defies the demographics of the heavily-Latino region.

“Needless to say, I’m disappointed,” de Leon told CalWatchdog on Thursday. “Any time people of color are excluded from decision-making processes directly tied to their health and wellbeing, fundamental change is needed. This is a textbook example of institutional racism.”

De Leon added that Los Angeles County Supervisor Mike Antonovich, a Republican who also sits on the SCAQMD board, is termed-out and will soon be replaced by “someone far more progressive on the matter,” likely shifting the balance of power back to the environmentalists.

However, of the current board’s ethnic composition, and the persistent lack of diversity, belies the fact that it’s largely been in Democratic, or environmentalist, control for years. De Leon did not say whether he’d reintroduce similar measures in the future.

Many opponents of the measure argued that the bill was a power grab by state policy makers at the expense of local control. And the large bloc of Democrats who either voted no or abstained suggest that the matter is not purely partisan.

“State versus local, that’s what this is about,” said Mike Madrid, a GOP strategist who helped devise the SDAQMD takeover. “It happened to be Republicans, but it was a state/local fight.”

But it was still a big win for Republicans, who are steadily slipping in their share of voter registration throughout the state, face the very real possibility of a Democratic supermajority in the Legislature next year and are not considered a consistent threat in any statewide election. For Republicans, local offices are where they can have a policy impact.

And despite several major policy victories for environmentalists, the defeat of the de Leon measure is a big win for the advocates of economic development.

John Husing, the chief economist of the Inland Empire Economic Partnership, has been studying Southern California’s economy since 1964. His research suggests a correlation between the rise of poverty and the rise of environmental regulations in the state. Husing argues that while the policies have had a positive impact on air quality in the region, the policies are imbalanced in relation to business development and subsequently drive poverty, which affects health.

“The whole air-quality, green initiative is having detrimental effect on moving people out of poverty and into the middle class,” Husing said of the SCAQMD region and the neighboring central valley.

Environmentalists have often said that any job loss associated with these air-quality policies would be offset by job creation in green sectors. However, Husing says statistics say that isn’t true, at least not in areas with high unemployment, like many communities in the SCAQMD.

Citing data from the California Employment Development Department and the U.S. Bureau of Labor Statistics, Husing said from 2010 to 2016 the U.S. added 836,000 manufacturing jobs, compared to California which added 42,500 — a mere 5.1 percent. While the growth rate is on pace with with the national average, it lags by over 50 percent behind the state’s share of gross state product.

Husing said that the sluggish growth of manufacturing jobs in the state is attributed to three factors: Companies leaving, companies growing beyond the state’s borders and out-of-state companies refusing to grow in the state.

“Whose affected by that? It’s not the companies,” Husing said. “They’re doing fine some place else. It’s workers whose jobs are never created. … So you’re basically cutting off routes to the middle class for those workers.”

The measure failed just before the stroke of midnight on Wednesday, 30-36. And while it is seen as a victory for Republicans, the measure was largely defeated by the 14 assemblymembers, all Democrats, who didn’t vote.

Those who didn’t vote were Luis Alejo of Watsonville, Joaquin Arambula of Fresno, Kansen Chu of San Jose, Jim Frazier of Oakley, Rich Gordon of Menlo Park, Adam Gray of Merced (who was not present), Kevin Mullin of South San Francisco and Shirley Weber of San Diego. The six who didn’t vote and live in the region were Ian Calderon of Whittier, Eduardo Garcia of Coachella, Mike Gipson of Carson, Roger Hernandez of West Covina, Chris Holden of Pasadena and Patrick O’Donnell of Long Beach.