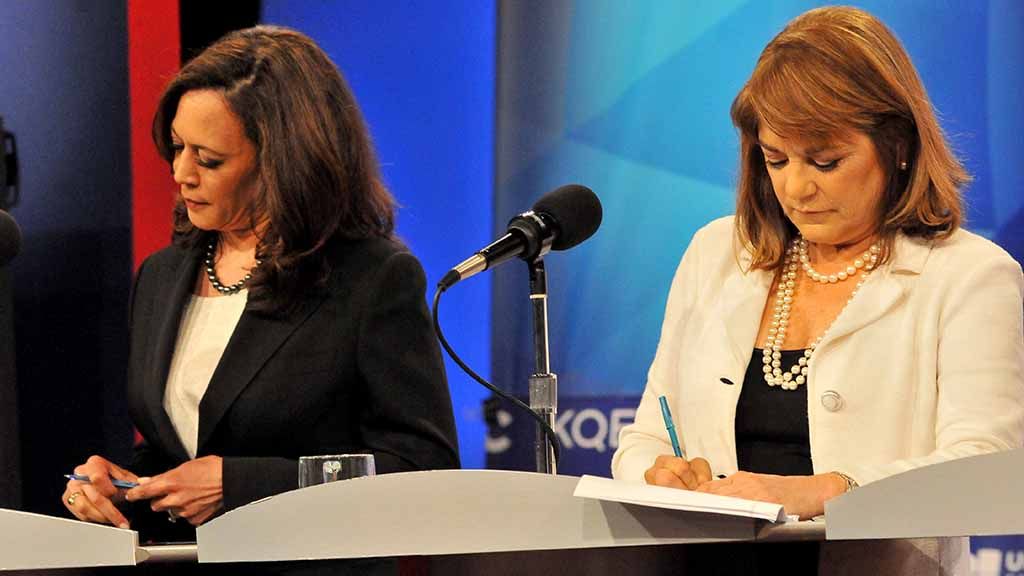 With just a few months remaining in the race to replace outgoing Sen. Barbara Boxer, the struggle has sharpened between leading Northern Californian candidate Kamala Harris and the Southland’s Loretta Sanchez. Seeking an edge against her opponent, who’s leading, Sanchez has gone on the attack, drawing Harris into controversies around everything from Donald Trump to their debate schedule. But questions remained as to whether Sanchez would be able to close the gap, at a time when California voters have not been captivated by the race or, according to polls, the candidates.

When it comes to Trump, a figure immensely unpopular with many California Democrats, it transpired that Harris once received $6,000 in donations from the mogul, but did not follow the lead of other attorneys general in bringing suit against him around allegedly fraudulent practices at Trump University.

“Trump donated to several state attorneys general in recent years, including New York’s Eric Schneiderman, who filed a lawsuit against the school for ripping off students,” the San Jose Mercury News reported[1]. “Harris’ office has also investigated the school, but so far has not filed charges. Several Trump University students filed a still-pending civil suit six years ago, which Sanchez insisted should have been enough for Harris to have immediately rejected Trump’s donations in 2011 and 2013.”

Meanwhile, as befits a underdog, Sanchez has zeroed in on the prospect of a robust debate schedule as a way to boost name recognition on the cheap and land some high-profile blows against Harris. As the Los Angeles Times noted[2], Sanchez “wants to have four debates — seeking to double the two proposed by her rival in the November election, Atty. Gen. Kamala Harris. The two campaigns traded barbs in early August after the Harris campaign announced she would participate in two forums, including one in Sacramento that Sanchez later rejected. At the time, Sanchez political consultant Bill Carrick criticized the Harris campaign in early August for ‘arrogantly announcing’ her terms.”

With Sanchez looking to Republicans to put her over the top, her need to make a positive impact among a broad and disillusioned audience in a short amount of time has grown acute. Although Sanchez “regularly receives 100 percent ratings from NARAL and Planned Parenthood, and has a lifetime 95 percent rating from the AFC-CIO,” New York Magazine observed[3], “she doesn’t have much choice” in courting whatever slice of the Golden State GOP electorate she can get. “A recent USC/L.A. Times poll showed Sanchez trailing Harris 30 percent to 16 percent,” the magazine added, “with three-fourths of self-identified Republicans declaring themselves either undecided or unwilling to vote for either of the surviving Democrats.”

Driven by Republican discontent, California voters as a whole have again shown little enthusiasm for turnout on election day. The USC poll indicated that “16 percent of registered voters, mostly self-described Republicans and independents, have decided to skip the first open U.S. Senate race that California has seen in 24 years — the same percentage of voters who favor Sanchez,” according[4] to the Los Angeles Times.

In today’s volatile campaign climate, however, analysts have cautioned against writing off Sanchez: “More than a third of California voters indicated they still ‘don’t know’ which Senate candidate they’ll pick on Nov. 8, according to the poll,” the Times concluded — a figure that, if it breaks Sanchez’s way in the home stretch, could help produce another upset victory in an election year defined by them. As Thomas Elias recalled[5] at the Los Angeles Daily News, about 40 percent of the electorate was undecided until the final days before the primary” election that landed Sanchez a second-place finish, “just as about 35 percent are similarly perplexed, undecided, uninterested or turned off today. One poll showed 28 percent of voters don’t plan to cast any ballot in this race.” The key difference between the primary and the general election? Unlike this time around, Republicans were able to cast votes for Republicans.