Bill Clinton fills in for ailing Hillary at CA fundraisers 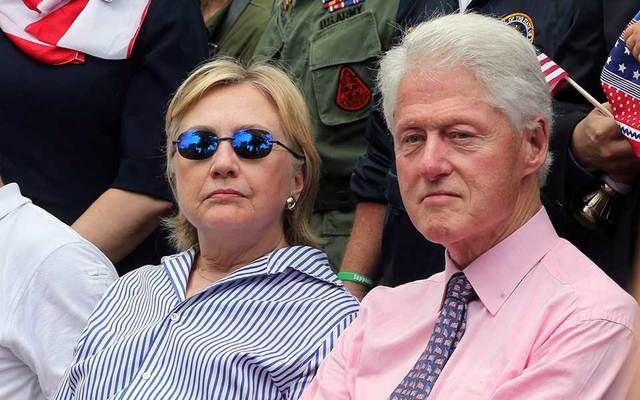 With a string of key donors left in the lurch by her recent health troubles, Hillary Clinton dispatched her husband Bill to California to fill in.

“She was forced to leave a 9/11 memorial event in New York,” as Yahoo News recalled[1], “and was seen stumbling limp-legged into a Secret Service vehicle. Clinton’s campaign initially said she had been suffering the ill effects of dehydration and ‘overheating.’ Clinton’s personal physician later disclosed she had been diagnosed with pneumonia on Friday, two days before the 9/11 event, raising broader questions about her campaign’s transparency.”

The ordeal — and the necessity of responding to it in a way that would play well in influential political and media circles — spurred the turn to the former president. “Plans for former Secretary of State Hillary Clinton to come to the San Francisco Bay Area and Southern California Monday and Tuesday for fundraisers and an appearance on ‘The Ellen DeGeneres Show’ were canceled,” NBC Los Angeles noted[2]. “Huma Abedin called with an urgent request,” as Politico reported[3]. “Could the former president drop his upcoming meetings in Washington, and take over for his pneumonia-felled wife on the campaign trail.”

Mr. Clinton took on three fundraising events — one in Las Vegas and two in California, hosted by Seth MacFarlane, Diane von Furstenberg and Barry Diller. “Donors were asked to give $5,000 to $33,400 to attend the gathering at MacFarlane’s home, while tickets to the von Furstenberg-Diller dinner were $100,000 a person,” the Washington Post reported[4]. As NBC LA noted, $33,400 is the largest individual yearly contribution to a national party committee permitted by law.

In California, Clinton holds a virtually insurmountable double-digit lead over Trump, despite the Trump campaign’s periodic claims that he could put the deep blue state in play come November. What’s more, Clinton has maintained a sizable war chest advantage relative to Trump’s. But polls have tightened nationwide, including in key swing states, and the Clinton camp has come under internal fire from nervous Democrats. “Clinton remains far ahead of GOP presidential nominee Donald Trump in fundraising, bringing in $143 million in August in conjunction with the Democratic National Committee, compared with the $90 million that Trump raised with the Republican National Committee,” the Post added. “However, his strong small-dollar operation appears to be close to matching hers: Trump now boasts 2.1 million donors to Clinton’s 2.3 million.”

The use of Clinton’s husband as a surrogate reflected the campaign’s sense of urgency– as well as the importance it placed on coming as close as it could to a satisfying sense of normalcy for the influential backers clustered along the West Coast. “Other than a prime-time speech at the Democratic convention, Bill Clinton’s general election schedule has been purposely low-key, reflecting the Clinton campaign’s desire to keep him from overshadowing his wife or creating unnecessary distractions,” the Sacramento Bee observed[5]. “But those concerns became secondary this week.”

“For all his political gifts, Bill Clinton has been an imperfect messenger on his wife’s health this week. He volunteered in an interview that she’s had episodes like this before and on Wednesday he said she had flu, not pneumonia. A spokesman said he misspoke and meant pneumonia, but such moments provide grist to conspiracy theorists who think Hillary Clinton is hiding health issues.”

Analysts have largely agreed that Hillary will swap back in for Bill as soon as the Clinton campaign decides it is possible for her to do so. “We need to hear directly from the candidate at this point in the election,” a longtime Clinton ally and DNC member told Politico. “It’s nice to have him, but the only real surrogate who works at this point is President Obama.” The sitting president, who has faced heavy lobbying from California Democrats to expand coastal environmental protections and support an extension of Obamacare coverage to unlawfully present immigrants, could soon find himself asked to stump for Clinton on the West Coast as well.