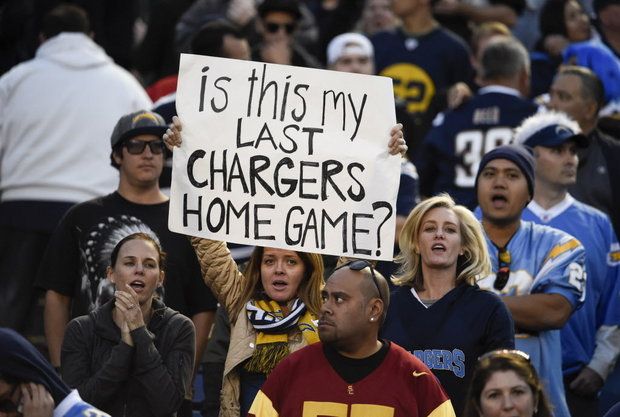 The St. Louis Rams may have once again become the Los Angeles Rams, capping off the biggest suspense story in the National Football League, but the controversy over the city’s final lineup of teams has flared up yet again.

In San Diego, where the Chargers have gone down to the wire with city officials on a possible move that once looked like a done deal, the next twist depends on voters. Although analysts and fans have cautioned that one NFL team may be plenty for Los Angeles, especially so soon on the heels of the Rams’ return, the stadium deal holding the Chargers’ future in the balance has failed to rally popular support. According to a YouGov poll conducted late last month, only “a quarter of San Diego adults strongly or somewhat support the proposal for a new, taxpayer-funded $1.8 billion stadium and convention center downtown,” as USA Today recalled[1]. “The poll showed more than half — 52 percent — strongly or somewhat opposed the measure, with the other 23 percent not stating a preference.”

“To win the vote, the team needs two-thirds of voters to approve the project because it’s a tax hike for a special purpose in California. If the vote fails, the Chargers have until Jan. 15 to decide whether to move to Los Angeles, where they have an optional deal to share a lucrative new stadium with the Los Angeles Rams.”

If the push to use the ballot to keep the Chargers in San Diego has been a slog, however, city officials’ backup plan has emerged as a potentially dramatic Hail Mary pass — to the judiciary. City Attorney Jan Goldsmith told radio host Darren Smith “he would ask the state’s high court to ‘take jurisdiction’ over the city’s November election as it pertains to two stadium-related ballot initiatives: the Chargers plan to raise the city’s hotel tax to build a stadium and convention center, and the Citizens’ Plan, which would increase the tax to help pay for tourism marketing and an off-the-waterfront convention center,” according[2] to U-T San Diego. Although “no public money could go toward stadium construction,” the city’s inquiry “could come as early as next week, if county officials examining signatures declare that either or both initiatives have qualified for the ballot,” the paper added.

Oakland’s Raiders, the other California team caught up in the L.A. relocation game, have struggled to strike a deal with their own home town. According[3] to NBC Sports, League Commissioner Roger Goodell appeared to discourage another move to L.A., suggesting “you never want to see a community lose their franchise once, much less twice,” making reference to the Raiders’ ping-ponging over the decades between L.A. and Oakland. “I think there’s a solution there, but it takes the community to help identify it,” he said. In the wake of the Rams deal, and unable to count on the Chargers to come through on the stadium-sharing deal that had briefly given the duo a bettor’s edge against the Rams, the Raiders have shifted their attentions from L.A. to Las Vegas.

“Of course, the NFL has allowed communities to lose franchises twice: St. Louis lost both the Cardinals and the Rams,” NBC Sports noted. “So it wouldn’t be unprecedented for the Raiders to vacate Oakland twice. But Goodell said the recent authorization of a new stadium in Las Vegas isn’t enough to bring the Raiders to town.”

Nevertheless, Las Vegas has thrown its considerable weight behind serious plans to lure the team in. The Southern Nevada Tourism Infrastructure Committee recently cast a unanimous vote “to recommend $750 million in public funding for a $1.9 billion stadium,” ESPN reported[4], drawn from hotel taxes. That sum would be added to $500 million from owner Mark Davis, “which includes a loan from the NFL for a new stadium, to the project,” the network added. “The family of Sheldon Adelson — chairman of casino and resort outfit Las Vegas Sands Corporation — has pledged another $650 million for the proposed 65,000-seat, domed venue, which would be shared with the UNLV football team.”