The state of California appears to be on a collision course with the federal government over how it responds to a school accountability provision in the Every Student Succeeds Act,[1] the measure approved last year to replace the controversial and unpopular No Child Left Behind Act.

No Child Left Behind, championed by President George W. Bush and Sen. Ted Kennedy, D-Massachusetts, was enacted in 2002. It included a long list of mandates that states had to follow to receive federal funding. But it quickly became a lightning rod because of its heavy emphasis on testing. It was also criticized for setting unrealistic goals.

Last year, the House and Senate moved to pass a new federal framework that included far fewer requirements. But accountability advocates did manage to win a provision that they believe will force states to step in and improve poorly functioning schools. It mandates that states must intervene with schools which repeatedly fail to graduate two-thirds of students, fall in the bottom 5 percent of academic achievement or have chronic problems with low scores for ethnic groups.

U.S. Department of Education officials charged with drafting rules for this provision want states to adopt simple metrics based mostly on test scores that provide one number for each school, making it easier to assess academic performance. 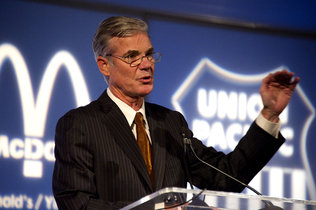 But Gov. Jerry Brown, state Superintendent of Public Instruction Tom Torlakson (pictured) and state Board of Education President Michael Kirst have for years disapproved of the single-score rating. This view — and the aggressive lobbying of the California Teachers Association and the California Federation of Teachers — led to the scrapping[2] of the Academic Performance Index that had previously provided snapshot looks at school performance.

Instead, the state Board of Education earlier this month unanimously adopted[3] a system that rates schools on several factors, including math and English test scores; graduation, suspension and absenteeism rates; and effectiveness of English-learner courses. Kirst and Torlakson wrote a letter[4] to a U.S. Department of Education officials urging that California’s multi-metric standard be accepted.

But the proposal has come under fire within California. While it was being finalized, the state evaluation system was blasted[5] in a Los Angeles Times editorial as being confusing and unhelpful. The Legislature was also skeptical. At the behest of Assemblywoman Shirley Weber, D-San Diego, the Assembly and Senate passed a bill with almost no dissent that had a similar variety of metrics for schools — but also a bottom-line, single score on academic performance, as the U.S. Department of Education wants.

Last weekend, Gov. Brown vetoed[6] the bill — AB2548[7] — saying the standards developed by the state Board of Education were superior.

Brown, Torlakson and Kirst may be hoping for a more sympathetic ear from Clinton. A high-profile education reformer earlier in her career, in recent years she has echoed teacher unions’ criticism[8] of assigning so much importance to results of standardized tests.