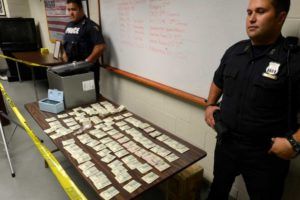 A bill reining in abuse of civil asset forfeiture laws by law enforcement agencies was signed by Gov. Jerry Brown on Thursday, marking a significant victory for advocates of civil liberties.

Under a compromise struck in the last weeks of the legislative session, law enforcement officials would not need a conviction to seize property, like cash and houses, valued above $40,000 — but 80 percent[1] of cash seizures are below that amount.

Civil asset forfeiture was originally used to seize the property of criminal enterprises, toppling them in the process. As law enforcement budgets were cut, they became more dependent on forfeitures as a steady revenue stream and the claims of abuses piled up.

California law already bars the practice of seizing property without a conviction for assets valued at under $25,000 and requires “clear and convincing evidence” of a connection to a crime for assets exceeding $25,000 in value, but law enforcement can sidestep state law if it’s done in partnership with the federal government.

Local agencies can kick 20 percent of the proceeds to the federal government as part of the “equitable sharing” program, which does not require an arrest. In fact, there really only needs to be a suspicion that the property, not necessarily the person, is attached to some criminal activity.

Opponents say that law enforcement does not “police for profit” and civil asset forfeiture is one of the many tools used to fight large criminal enterprises.

The measure died previously under major opposition from law enforcement. However, the bill’s sponsors, Sen. Holly Mitchell, D-Los Angeles, and Assemblyman David Hadley, R-Torrance, were able to negotiate the compromise with the help of a diverse group of supporters[2]. The measure ultimately sailed through the Legislature.