The San Diego Union-Tribune endorses a Democrat for president, first time ever 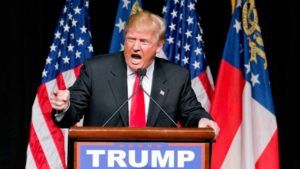 For the first time in its 148-year history, The San Diego Union-Tribune[1] endorsed a Democrat for president — Hillary Clinton.

Time will tell if this endorsement is just a strange blip in an even stranger election or if the paper’s Editorial Board is just changing with the region it serves. The endorsement, however, was a lesser-of-two-evils argument.

Instead of heaping praise upon the preferred candidate, as most endorsements do, the U-T imagined a grim future under a President Donald Trump, the Republican nominee.

“We understand the lack of enthusiasm for her candidacy, the anger over her private email server[2], family foundation[3] and income from Wall Street speeches[4], and the questions about how America fared[5] in foreign affairs when she was secretary of state,” the U-T wrote. “But despite Trump’s insistence otherwise, she has the better temperament to be president — and the experience, background and relationships with world leaders that we need in a president.”

Concerns over international relations, temperament, the economy and trade were the highlights in the argument against Trump. The U-T also said Trump would take into office an “open-enemies list” (basically Amazon founder Jeff Bezos and a bunch of news organizations), but missed Clinton’s history of harboring grudges[6].

“Sixteen months into his campaign, Donald Trump remains Donald Trump,” the U-T wrote. “Despite constant counsel from GOP advisors and insiders to adopt a decorous public persona, Trump continues to lash out at critics, to insist complex problems can be solved with little effort and to depict an America that’s been ‘ripped off by every single country in the world,’ as he said in this week’s debate.”

The U-T predicted that a Trump administration could be friendlier with Russia than traditional U.S. allies, compared him to former Venuezuela President Hugo Chávez and wrote he was nothing like Mitt Romney, the 2012 Republican presidential nominee.

“Vengeful, dishonest and impulsive, Trump is no Romney,” the U-T wrote. “This is why Hillary Clinton is the safest candidate for voters to choose in a complex world.”