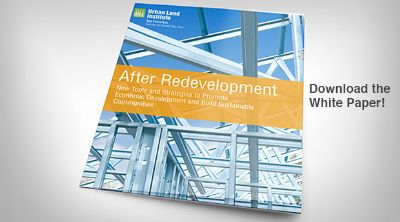 Five years ago, when state courts upheld[1] Gov. Jerry Brown’s and the Legislature’s move to shut down redevelopment in California and seize $1.7 billion in redevelopment funds from local agencies around the state, Brown’s crusade won cheers[2] from many[3] of the state’s pundit class. They saw the diversion of some property tax revenues to well-connected developers in the name of improving “blighted” areas as akin to crony capitalism, and many also didn’t like the frequent use of eminent domain to seize land for redevelopment projects.

But Brown never really made clear if he shared this critique — or if he just thought that during a budget crisis, the $1.7 billion he could take could be put to better use. He had used redevelopment while mayor of Oakland, but he also had to be aware of redevelopment abuses involving dubious blight declarations and the diversion of 12 percent[4] of all state property taxes to various redevelopment projects.

Now it is clear that Brown was driven by fiscal pressures. Last year, he signed Assembly Bill 2[5], which allows local governments to expand and better fund entities called a “Community Revitalization and Investment Authorities.” Last week, he signed AB2492[6], a companion bill that defines circumstances in which local taxes can be diverted for which projects — and it appears to encourage the same sort of mischievous declarations of blight that drove critics mad in redevelopment’s previous California incarnation. Both were authored by Assemblyman Luis A. Alejo, D-Salinas.

Successful businesses could be declared blighted

Under the latter measure, blight can be declared — and land seized for economic development purposes — if median income in a defined area is lower than 80 percent of the median income either “statewide, countywide or citywide.” Critics such as Marko Mlikotin of the California Alliance to Protect Private Property Rights say this would give developers and their political allies a tool to declare many thriving businesses, churches or public offices as blighted so their land could be conveyed to the developers for projects that are pitched as helping the local economy. Such diversions were allowed by the U.S. Supreme Court in 2005 on a 5-4 vote in the Kelo v. New London case[7].

Costco [received] over $30 million in subsidies in Orange County alone, extrapolated to $300 million statewide. Wal-Mart has gotten over $1 billion in public handout nationwide, with an estimated $100 million in California. Pro sports also profit from lavish subsidies. The Raiders got $7 million from Irwindale just for opening negotiations on a new stadium site (never built). In 1995, the Raiders returned to Oakland, lured by $94 million in public subsidies. The Chargers have gotten $134 million in seat guarantee pay offs courtesy of San Diego taxpayers.

While redevelopment apologists claim to be “rebuilding” our cities, barely 19 percent went for actual real estate development, and another 5 percent for land acquisition, much of it still vacant.

When Anaheim “improved” its working class Jeffrey-Lynne neighborhood, it forced existing apartment owners to sell to Southern California Housing Corp. Half of the units were demolished, over 400 tenants evicted and those that remained saw their rents doubled. Public subsidy: $54 million.

The Brea Redevelopment Agency demolished its entire downtown residential area, using eminent domain to force out hundreds of lower-income residents. Much of its housing money has since been spent on mixed-use projects that are really more commercial than residential. The agency gave $649,000 in housing funds to a largely retail development that will include only eight loft apartments.

Some of Norby’s criticisms were confirmed by a 2011 Legislative Analyst’s Office report[9].

Defenders of redevelopment counter that bad projects shouldn’t be held against good projects.

The redevelopment of San Diego’s Gaslamp area downtown is often held up as the crown jewel of California redevelopment. In the 1970s, the area was crime-ridden and seedy. Now it is a haven for towering hotels, trendy restaurants and bars, and the Petco Park baseball stadium.

Many cities which rely heavily on sales taxes for revenues also tout their use of redevelopment to open up “Mile of Cars”-style areas full of lucrative vehicle dealerships.