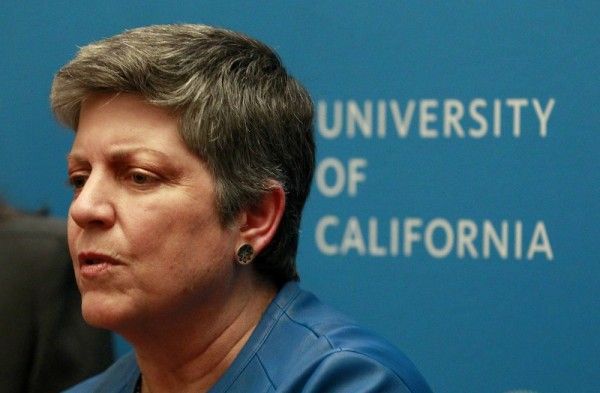 With a single op-ed, UC chief Janet Napolitano has become an unlikely ally of conservative and traditionalist critics of the speech-policing movement among campus crusaders nationwide.

In a Boston Globe op-ed entitled “It’s time to free speech on campus again,” Napolitano unburdened herself of judgments she appeared to have been forming over the past several years in the hot seat of one of the country’s most progressive university systems. “As president of the University of California system, I write to show how far we have moved from freedom of speech on campuses to freedom from speech,” she wrote[1]. “If it hurts, if it’s controversial, if it articulates an extreme point of view, then speech has become the new bête noire of the academy. Speakers are disinvited, faculty are vilified, and administrators like me are constantly asked to intervene.”

Subtly invoking the 50th year anniversary of the Free Speech Movement birthed on Berkeley’s campus, Napolitano cast the current protest trend as a distorted inversion of the FSM’s goals. “This was free speech, loud and angry and in your face,” she wrote, referencing the antiwar rhetoric of the Vietnam era. “Today many of the loudest voices condemning speech and demanding protection are students on those same campuses. Listening to offensive, or merely opposing, views is subject to frequent criticism. What has happened, and what are we to do about it?”

Napolitano’s defense of unbuffered speech summoned to mind her experience facing withering criticism from campus activists in the UC system since her tenure began. Two years ago, behind closed doors, “various students condemned her record on deportations as Homeland Security secretary, her lack of professional academic experience and the selection process by which she became UC president, among other issues,” according to the Daily Californian. “Eventually, most of them walked out of the meeting before Napolitano could respond to their statements.”

Before they did, the students did their best to leave Napolitano shaken. “I promise you that, for the next 30 minutes, you will be made uncomfortable,” one warned[2]. “Up until now, your campus visits have all been a complete and utter farce,” DailyCal reported her as saying. “If you really wanted to know just how special our university really is, you would be walking alongside students, not avoiding them — listening to everyone’s story, not ignoring them.”

Recently, however, Napolitano has thrown the weight of her office behind the kind of initiatives that protestors have worked to pressure university administrations into pushing. In January of last year, as Robby Soave observed[3] at the Daily Beast, “Napolitano dispatched letters to UC deans and department chairs inviting them to attend seminars ‘to foster informed conversation about the best way to build and nurture a productive academic climate.'” Under her tenure, the UCs launched[4] a program for faculty training them in so-called microaggressions, including phrases or terminology claimed to ambush students unprepared for the modest but cumulative hostility they inflict: “Under her administration, bureaucrats warned professors to avoid describing America as a ‘land of opportunity’ and to never say ‘affirmative action is racist’ or ‘I believe the most qualified person should get the job.'”

Nevertheless, Napolitano’s degree of commitment to activists’ cause have been viewed with suspicion or doubt. Compounding her troubles, last month, Napolitano had to defend her inclusionary bona fides under unusual circumstances. Sujit Choudhry, the ex-dean of the UC Berkeley Law School, “claimed she had racially discriminated against him when she ordered a second investigation into sexual harassment allegations by his executive assistant,” as India-West recalled[5]. “During a press briefing at her office regarding new financial aid and admissions policies, Napolitano told India-West: ‘Without getting into the details of pending litigation, I will say that we intend to dispute that allegation vigorously.’ The UC president also stated that diversification of campus faculty was one of her primary concerns.”