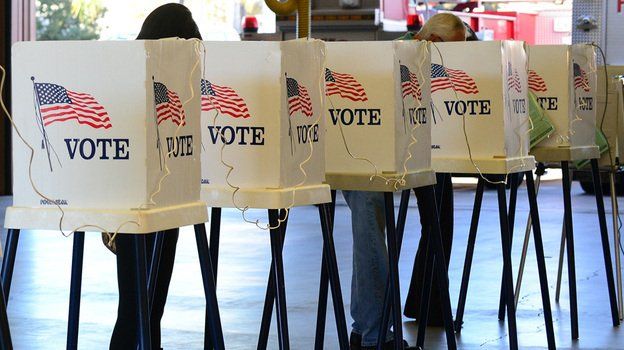 As early ballots arrive in mailboxes this week, Golden State voters will arrive at a symbolic and substantial demographic landmark: a so-called majority-minority electorate.

“For the first time, non-Latino whites will fall below 50 percent of the state’s eligible voters,” as the California Civic Engagement Project predicted in 2014. “From 1980 to 2014, the state’s Latino and Asian American populations grew by 230 percent and 331 percent, respectively, while the white population fell about 6 percent,” the Orange County Register noted[1], citing a January report from the Civic Engagement Project.

Despite a clear trend since the 1990s toward political dominance by Democrats, the longer term implications of the demographic shift have remained shrouded in mystery. On the one hand, in-state Republicans have weathered a period of fracture likely to end eventually in a new but familiar rough equilibrium between the two major parties. On the other hand, nonwhite voting patterns, especially in recent immigrant families, have in some respects had a limited impact on California politics. Many nonwhite residents, according to the Register, “are too young to vote or otherwise not registered. So far, the voter rolls haven’t made the minority-majority jump. A Field Poll found that 59 percent of California’s registered voters are white, down from 83 percent in 1978.”

Another complicating factor involves voter enthusiasm and turnout. Voter rolls have swelled tremendously, with a surge of new registrations pushing the current total to over 18 million. “The new data show California now has more registered voters than the population of 46 states,” the Los Angeles Times reported[2]. Yet registered voters have not coalesced around a consensus political agenda. “Republicans trailed Democrats in registration by more than 18 percentage points,” the Times continued, but decline-to-state voters, “known in California as those who have ‘no party preference,’ were a close third and made up more than 23 percent of the statewide registration.”

For Democrats, Republicans and unaffiliated voters alike, showing up at the polls has not always been an easy sell — despite consistent measures from Sacramento designed to make voting as easy and popular as possible. (“In California, no law requires voters to show ID. They soon will be registered to vote automatically. Their vote will be counted even if it shows up three days after the election,” as the Sacramento Bee noted[3].) Many Democrats have rested easy in the knowledge that their party will prevail even with low turnout. Although Loretta Sanchez would be the first Latina U.S. Senator if elected to replace Barbara Boxer, for instance, her candidacy has not ratcheted up projected turnout in November. Republicans, traditionally more likely to vote, have faced sharp intraparty conflicts in recent years, sometimes leaving state and local elections effectively uncontested. Voters who have soured on both parties, meanwhile, have not always had an opportunity to make a decisive difference in election day outcomes.

Nevertheless, the determined push by California officials for de facto amnesty for unlawful and undocumented immigrants has only sharpened as an electoral wedge issue. In Santa Ana, as the New York Times recently observed, transformative changes around immigration have raised political questions even as Latino political power has increased only modestly. “Immigrants living illegally in California are entitled to driver’s licenses. Their children can receive state-funded health insurance. Local law enforcement officials generally do not provide information to federal immigration authorities, as they do in many other parts of the country. On a smaller, if no less symbolic, level, the first thing the Santa Ana City Council did when it went all-Latino in 2006 was pass a law requiring simultaneous translation of all of its meetings to Spanish,” the Times reported[4].

“The power and presence of Latinos in this community in Orange County — itself once a bastion of Republicanism — is echoed up and down the California coast. Latinos now make up just under 40 percent of the state’s population, projected to increase to 47 percent by 2050. The leaders of both houses of the Legislature are Latino, as is the secretary of state, the current mayor of Los Angeles and the previous mayor.”