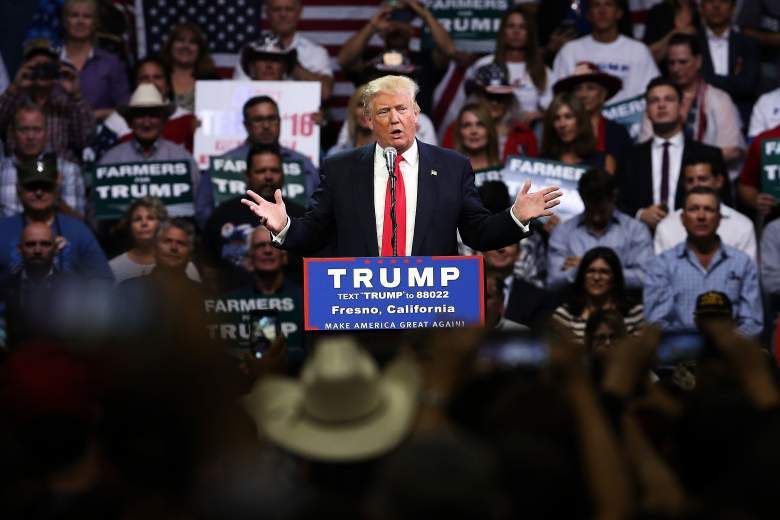 California Democrats have centered around a handful of Republican challengers they hope to tar with Donald Trump’s brush.

Assemblymen Dante Acosta, R-San Bernardino, David Hadley, R-Torrance and Marc Steinorth, R-Redlands, Assemblywoman Young Kim, R-Fullerton, and state Senate candidate Mike Antonovich have all been hit with the attack, which aims to send them packing by exploiting Trump’s historic unpopularity in-state. “Trump is extraordinarily unpopular in California, even for a Republican in the famously liberal state. Nearly seven in 10 California voters view Trump unfavorably, according to a Field Poll conducted last month. More than half said they hold a ‘very unfavorable’ view of him,” the San Jose Mercury News reported[1].

“California Democrats in those races are using a strategy their party has employed in congressional and other contests across the country — spending millions of dollars to link Republican candidates to their party’s nominee for president, even in races where GOP lawmakers have refused to back Trump.”

The Republican nominee has still managed to maintain a hard core of support. But it has been increasingly likely to draw headlines that do little to flatter the candidate. “Supporters of Republican presidential nominee Donald Trump staged a protest Tuesday outside the Los Angeles office of attorney Gloria Allred, who represents Summer Zervos — the Huntington Beach woman who claims she was a victim of unwanted sexual advances by Trump,” as the Mercury News noted[2] separately. “Allred and Zervos made headlines Friday when the contestant on Season 5 of ‘The Apprentice’ said during a news conference that Trump kissed and groped her after she approached him about a position in his business empire.”

Although the Trump campaign made hay early in the election season by playing up California’s struggles with unlawful immigration, and both the candidate and his team often intimated that they could put the deep-blue state in play with their unconventional approach and populist message, Trump’s stumbles approaching the electoral finish line have put West Coast voters far out of reach. “The controversial GOP candidate’s support has fallen to 30 percent, below the current low-water mark held by George H.W. Bush, who got 33 percent of the popular vote in California in a three-way contest in 1992,” according[3] to ABC 10 News.

“While both presidential front-runners have lost support in the past 17 days, according to a SurveyUSA pre-election tracking poll conducted for KABC-TV in Los Angeles, KPIX-TV San Francisco, KGTV-TV San Diego, and KFSN-TV Fresno, Hillary Clinton’s lead over Trump remains steady at 26 percentage points.”

But in a reminder that Democrats have not fully addressed voters’ frustrations, Clinton and Trump both dropped three points, while the undecided vote doubled, the station reported.

Meanwhile, the main target of Trump’s intraparty battles, House Speaker Paul Ryan, has not given up on the Golden State as a critical place to seek and show support. “The Wisconsin representative arrives in California next Thursday and will hold 12 events in seven cities over two days,” the Los Angeles Times noted. “Ryan is expected to campaign with Reps. Jeff Denham, David Valadao and Steve Knight, as well as Scott Jones, who is challenging Rep. Ami Bera. He will also hold events benefiting Team Ryan, a joint fundraising committee.”

“Ryan was already a prodigious fundraiser, raising nearly $50 million this year and transferring more than half to help congressional candidates. But he is barnstorming the nation in the lead-up to the November election. This month alone, Ryan has held more than 65 events in 17 states.”

Despite Ryan’s appeal to sitting Republican representatives in California, the national mood among the GOP has appeared to turn against him amid Trump’s attacks. In a recent[4] Bloomberg poll, for instance, “46 percent of all voters have a negative view of Ryan, and only 37 percent favorable, a drop from earlier surveys this year. More striking, when asked who represents their view of the party, Republicans by 51 percent to 33 percent prefer Trump over Ryan.”