Former state senator sentenced to 42 months in prison for corruption 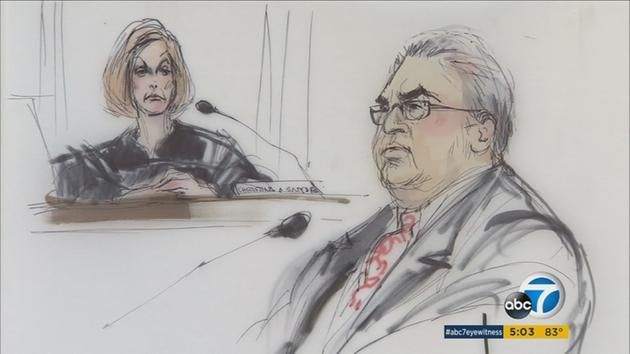 Headed for a sizable jail term, ex-state Sen. Ronald Calderon, caught in a sting that laid bare his role in an influence-peddling scheme, has reached the likely end of his political career.

Calderon, “once the most powerful member of a politically influential family, was sentenced Friday in Los Angeles to 42 months in prison after he pleaded guilty in a federal corruption case,” the Los Angeles Times reported[1]. “The Montebello Democrat, who served in the state Senate for eight years ending in 2014, admitted in a plea deal in June that he had accepted tens of thousands of dollars in bribes from undercover FBI agents and a hospital executive in return for official favors.”

Calderon’s guilty plea put him on the hook for one count of mail fraud, and for “soliciting more than $155,000 in payments or financial benefits in exchange for supporting or blocking legislation,” as the Associated Press noted[2]. “He took $12,000 worth of trips to Las Vegas from an undercover FBI agent who posed as the owner of a Los Angeles movie studio seeking his support for film tax credits, though the legislation never passed, according to his signed plea agreement. The agent hired Calderon’s daughter for a $3,000 a month no-show job and paid $5,000 toward his son’s college tuition.”

Despite a strong push from federal prosecutors for a bearable but robust punishment — Calderon is 59 — the former Senator benefitted from a degree of judicial leniency. “Federal prosecutors had asked for a five-year sentence for a charge for which the maximum possible penalty was 20 years. U.S. District Judge Christina Snyder, who handed down the sentence to Calderon, said five years was too severe but that a significant prison sentence was needed to punish Calderon and send a message to other elected officials that corruption will not be tolerated,” the Times added.

In a sad irony, however, Calderon almost lost another year to prison as a result of his own request for preferential treatment. “Calderon made an emotional plea to stay out of prison to a judge who said he had not accepted responsibility or apologized to California’s citizens for taking bribes in exchange for his influence in the state capitol,” according[3] to the Associated Press.

The disgraced lawmaker had even asked Snyder to grant him house arrest. Assistant U.S. Attorney Mack Jenkins argued that privilege would “continue to trivialize his corrupt actions, as he does throughout his sentencing position, and continue to evade true accountability.”

“After he spoke, Snyder said she had contemplated putting him behind bars for four years because his request for leniency was self-serving. But she said the shorter term was significant and would send a message to the longtime lawmaker.”

Calderon’s last-minute play represented a fallback position from his lawyer’s contention during the hearing accompanying his plea bargain that Calderon ought to be spared imprisonment entirely lest his life be endangered. “Mark Geragos, Calderon’s attorney, suggested during the court hearing that his client should serve no time in prison,” the Times reported. “He alleged that the government had entrapped Calderon and raised the former lawmaker’s poor health. The former state senator’s legacy has been ruined by his guilty plea in the case, he added.”

News of Calderon’s wrongdoing came at a nadir in Sacramento’s political reputation. “Calderon was one of three state senators charged with separate crimes in 2014 that shook up the Legislature,” the AP recalled[4] separately. The family’s political dynasty suffered as well. The case against Calderon “swept up his brother, former state Assemblyman Tom Calderon, D-Montebello, who on Sept. 12 was sentenced to 10 months in federal custody for money laundering after pleading guilty to hiding the tens of thousands of dollars in bribes paid to his brother,” the Whittier Daily News reported[5].