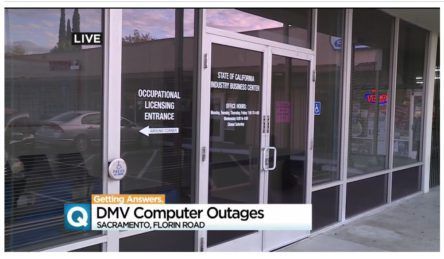 The government of the state that is home to Silicon Valley and is widely considered the global leader in innovative technology continues to be plagued by problems with computers.

On Friday, the California Department of Motor Vehicles reported things were close to normal after a chaotic week of mass computer failures, with just three DMV offices still offline. At one point earlier in the week, more than 120 of the the DMV’s 188 offices statewide were unable to handle such basic tasks as processing requests for new licenses or vehicle registrations.

Both the DMV’s main computer and its primary backup computer suffered what officials called “meltdowns.” In post mortems on the problem, experts outside state government expressed disbelief that both the main and backup computer were directly connected and housed in the same room, making both susceptible to the same risks from overheating, hacking and other problems.

“If their definition of disaster recovery is having primary and backup systems in the same hardware chassis, that’s grotesque,” one expert told[1] The Los Angeles Times.

IT problems with veterans, CalPERS, UC and more

But to followers of the state government, the DMV’s information technology headaches were only the latest in a long line of embarrassing, basic problems.

In June, a report[2] from the state auditor’s office said the California Department of Veterans Affairs had wasted $28 million on an erratic computer system that was supposed to process services and pay bills for care provided to state veterans.

In 2013, unemployment benefits for 150,000 residents went unpaid over the Labor Day weekend because of problems with new computers used by the state’s Employment Development Department.

In 2012, the California Public Employees’ Retirement system was besieged by complaints from state retirees whose health insurance policies weren’t being renewed because of problems with CalPERS’ new $514 million computer system.

In 2009, state Controller John Chiang said he was unable to comply with Gov. Arnold Schwarzenegger’s order to furlough state workers and reduce their pay during a budget crisis because the state’s computers were based on a programming language from the 1950s — COBOL — and couldn’t readily be reprogrammed.

Chiang faced charges[4] from Republicans that he was just trying to insulate government union workers from the pain of the budget crisis. But John Thomas Flynn, hired by Gov. Pete Wilson as the state’s first chief information officer, said in a 2009 interview with me that he was inclined to believe Chiang.

Candid self-assessment is not the norm

Flynn has described California government’s computer failures as being the direct result of a culture in which no one is punished when bad things happen and candid self-assessment is rate.