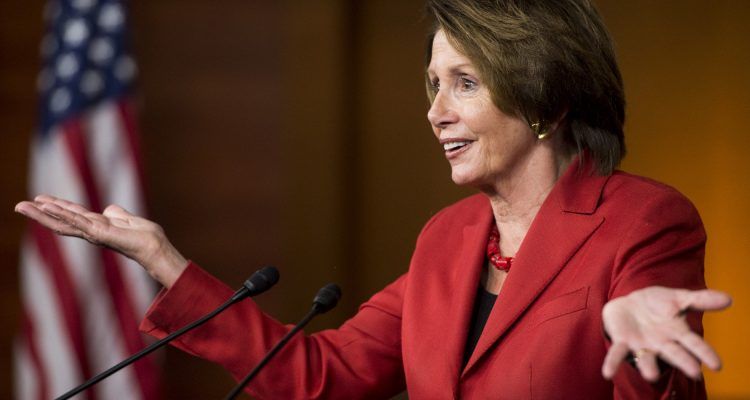 On Friday, Pelosi revealed “she plans to vote for California’s Proposition 64, making her one of a small number of high-level politicians to support legalizing the recreational use of marijuana,” according[1] to the Los Angeles Times.

The influential Democrat wasn’t explicit about the delicate politics involved in judging the best way to catch California’s pro-marijuana wave — or not. “Pelosi told the Los Angeles Times Editorial Board and Times reporters that she has not taken public positions on many of the state ballot measures because she is focused on other races in her fundraising and public appearances.” As the paper explained, Pelosi’s support for Prop. 64 is broadly aligned with her favorable attitude toward many of the Golden State’s other big-ticket ballot initiatives this year, including Proposition 62 (repealing the death penalty), Proposition 51 ($9 billion in school bonds) and Proposition 52 (designating Medi-Cal funds).

“She also said she personally supports Proposition 56 to raise tobacco taxes by $2 per pack. She said she hasn’t gone public with positions for all of the measures because she feels some things should be done by the Legislature.”

The endorsement marked a sea change for Pelosi, auguring a bigger shift among Democrats not only in California but with national offices and profiles. “In 2010 — when, according to Gallup, 46 percent of Americans thought marijuana should be legal, compared to 60 percent today — Pelosi declined to take a position on Proposition 19, the last attempt to legalize marijuana in California,” Reason observed[2].

Although cultural trends in California tend to inflect politics with a taste for liberalization, the bid to legalize pot has come at a time when cross currents in some voter patterns could tap the brakes. “While a surge in Latino voters could help Hillary Clinton on Tuesday, it could hurt efforts to legalize marijuana in nine states,” McClatchy recently concluded[3]. “Hispanics are less likely to back legalization than either white or black voters, according to a poll released last month by the Pew Research Center.”

“Forty-six percent of Hispanics said the drug should be legal, while 49 percent said it should remain illegal, the poll found. By comparison, big majorities of both black and white voters — 59 percent — said it was time to end the federal prohibition on marijuana.”

Nevertheless, voter enthusiasm may turn out to be fairly unimportant relative to the broader trends in business that have smoothed the way for even very well established Californian officials to accede to the idea of recreational marijuana. “New Frontier Data estimates California’s marijuana industry will generate $7.6 billion a year in direct sales to consumers by 2020, and that’s not including sales generated when growers sell to processors and when processors sell to dispensaries,” the San Jose Mercury News noted[4] — a figure exclusive of merchandise and accessories like pot-referencing t-shirts and bongs, according to New Frontier executive vice president of industry analytics John Kagia.

With Democrats controlling state politics, and some Republicans looking for a new way to shore up their weaker position, bipartisan pressure has been strong to embrace those trends, which have been building so long and so steadily that it has become hard to see how they could be reversed. “At least six other members of California’s congressional delegation, including two Republicans, support this year’s initiative,” as Reason reported. “Sen. Barbara Boxer, D-Calif., who opposed legalization in 2010, says she is inclined to vote for it this year.” But many California officials have seemed most willing to accept legalized marijuana after the fact. “Lt. Gov. Gavin Newsom has long supported the marijuana ballot measure and has called, mostly without success, for other state elected officials to endorse it,” the Times recalled.