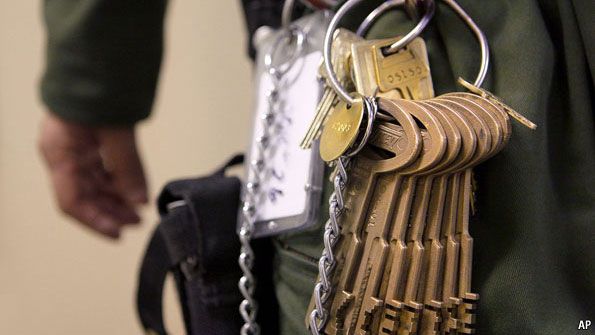 California has long been known as a law-and-order state, particularly following the crime spikes of the 1980s. The state passed the toughest “three strikes” law in the nation and state officials from both parties often have argued over who would be tougher on crime.

But in recent years, a variety of criminal-justice reforms[1] have been pushing the pendulum back in the other direction, albeit in a relatively quiet way. In 2014, California voters approved Proposition 47[2], which reduced some crimes from felonies to misdemeanors. Furthermore, Gov. Jerry Brown succeeded in implementing his “realignment” plan that moved many state prisoners to county jails.

Crime has gone up in major California cities since then and it’s not clear how much those measures contributed to the problem. But it doesn’t appear the recent uptick has slowed the push for reform.

In the Nov. 8 general election[3], voters rejected an effort to repeal the death penalty and, by a close margin, appear to have approved a measure designed to speed up executions. Nevertheless, voters also approved Proposition 57 by a wide margin. As the Legislative Analyst’s Office explains[4], the measure will “increase the number of inmates eligible for parole consideration” and make “changes to state law to require that youths have a hearing in juvenile court before they can be transferred to adult court.” The marijuana-legalization measure voters also approved would enable judges to expunge some people’s marijuana convictions.

The ballot box isn’t the only place where reform is moving forward. When the Legislature reconvenes in December, some legislators will almost certainly introduce bills that would reform the state’s system of “money bail.” It’s part of a nationwide reform movement headed by groups such as the American Civil Liberties Union[5].

Many are unfamiliar with the system by which criminal defendants post a bond that allows them to avoid jail time as their case winds its way through the system. A judge will set a bail amount that reflects the severity of the alleged crime and the defendant’s perceived flight risk. The defendant can post the full amount, which would be forfeited if he or she doesn’t show up at the appointed court date. Those who lack the resources also can go to a bail bonds company and pay a nonrefundable percentage (commonly 10 percent) of the bail. The bail bondsman posts the full amount and assumes liability to assure the defendant shows up for trial.

The bail bonds industry argues the system works well as it is designed. “When it comes to guaranteeing appearance at court, surety bail outperforms every form of public sector pretrial release and own recognizance release as well,” according to the American Bail Coalition[6]. The group, supported by bail-bonds companies, argues the current system also offers a cost-effective approach that costs the courts nothing for to supervise 2 million released defendants each year. Bail defenders also point to the taxes paid by the bail industry – and cite studies showing cost savings to counties.

But critics of the system, including the chief justice of the California Supreme Court, have raised some concerns. “Over time the discussion about bail (has become): Does it really serve its purpose of keeping people safe? Because if you’re wealthy and you commit a heinous crime, you can make bail,” said Chief Justice Tani Cantil-Sakauye, in a March 2016 editorial board meeting with the Sacramento Bee[7]. The problem, as the Bee and others have raised, is that poor people often don’t have the financial wherewithal to post bail. That forces them to stay in jail while wealthier people get to go home on their own recognizance and await trial. The chief justice has created a task force to review the issue.

Critics say the bail situation also encourages poor people to accept plea bargains, given that months in jail — and our court system moves very slowly — could cause their lives to collapse[8]. If they are in jail rather than working, they lose their apartments and their possessions. Their kids are often taken by Child Protective Services. It’s a problem not just for the poor people who are affected, but also for the state’s perpetually overcrowded jail system. More than 60 percent of people in California jails have not yet been sentenced for any crime.

As the nonpartisan Public Policy Institute of California reports[9]: “From 2000 to 2009 (the latest comprehensive data available for felony cases), California’s large urban counties relied on pretrial detention to a much greater extent than did large urban counties elsewhere in the United States. … Part of the difference in detention rates may be attributed to California’s higher bail amounts. The median bail amount in California ($50,000) is more than five times the median amount in the rest of the nation (less than $10,000). Research has demonstrated that pretrial release rates generally decline as bail amounts increase.”

In July, some Democratic state legislators held discussions[10] in Oakland on the matter. San Francisco District Attorney George Gascón said that “at least 29 jurisdictions have developed ‘risk-assessment’ models, which allow court and pretrial staff to use data and other evidence to determine whether a person should be released,” according to a news report[11]. That’s a likely model for coming proposals: shifting toward a system based more on judicial risk assessments than on the ability to post a bond. Assemblyman Rob Bonta, D-Oakland, announced his intent to introduce legislation when the Legislature is back in session.

The U.S. Justice Department also has weighed in[12] on behalf of bail reform in a Georgia case. The department argues that “bail practices that incarcerate indigent individuals before trial solely because of their inability to pay for their release” violate the 14th Amendment of the U.S. Constitution. However, a U.S. district judge rejected a similar argument in a Sacramento County case[13].

“The state’s interest in ensuring criminal defendants appear for trial dates is a legitimate one, and detaining individuals before their arraignment is rationally related to that legitimate interest,” U.S. District Judge Troy Nunley wrote last month in the case. As the San Francisco Chronicle reported[14], “Nunley refused, at least for now, to dismiss a claim that the bail system is unfairly punitive.” Nunley is an appointee of President Barack Obama.

Other similar cases are moving forward across the country, including in San Francisco. There, Public Defender Jeff Adachi commissioned a study finding that black inmates are more likely to be kept in jail awaiting trial than their white[15] inmates facing similar charges. Clearly, this issue will be heating up in the coming years, with a new Republican administration throwing more uncertainty into the situation, given the role the Obama Justice Department has played in the matter.

Critics also note the current system isn’t cost free, and that some states have moved to a risk-assessment system. “Risk assessment detention not only stems some of the unjustified inequalities on the impoverished but it also has proven to save the state money and actually prevent further crime by trying to keep the accused employed and out of trouble,” argues my R Street Institute colleague, Arthur Rizer, director of criminal justice policy. The current system, he adds, ends up “bloating our already bloated jails.”

Not all reformers look to eliminate money bail. Various compromises could emerge[16], including measures that eliminate bail for certain cases, or efforts to create easier ways for poor defendants to afford bonds. This is an emerging reform movement, so we’ve yet to see the kind of compromises that might emerge in the California Legislature.