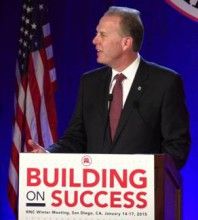 Good news for California Republicans: In a field of nine candidates for the 2018 gubernatorial race, they have two of the top three names, according to a poll released Tuesday.

San Diego Mayor Kevin Faulconer and Ashley Swearengin, the termed-out mayor of Fresno, placed just behind Democratic Lt. Gov. Gavin Newsom in a poll of registered voters taken prior to last week’s presidential election, conducted by The Field Poll and the Institute of Governmental Studies at UC Berkeley[1].

Newsom drew 23 percent to Faulconer’s 16 percent and Swearengin’s 11 percent, with six prominent Democrats trailing in the single digits. Although anything can change in politics, Faulconer said early this year that he won’t run for governor, and Tim Clark, a political consultant to Swearengin, told CalWatchdog on Tuesday he didn’t “expect her to run.”

Having been shut out of the U.S. Senate race after the June primary, thanks in part to the state’s relatively new system where the top two candidates advance regardless of party, Republicans will need to field a strong candidate at the top of the ticket in 2018 to help with fundraising and turnout for down ballot races and to show they can still compete in statewide elections.

In addition to legislative races, where Republicans will either be fighting off a Democratic supermajority by the narrowest of margins or trying to add a little bit of a buffer — the few races from last week that the Democratic supermajority hinges on have not yet been decided as the votes are still being counted — the 2018 gubernatorial election will elect statewide officers.

CA GOP Chairman Jim Brulte told CalWatchdog on Tuesday that the party was still focused on the outcome of last week’s election, but added the party was beginning to turn to 2018.

“I believe we will have strong candidates for a number of statewide offices,” Brulte said.

Both parties have struggled with a decline in voter registration for years, although the trend has been much more severe for Republicans, dropping from 36.4 percent of the electorate in 1996 to 26 percent late last month. Democrats in that time declined from 47.9 percent to 44.9 percent, but enjoyed a surge in registration over this campaign cycle that led to a slight uptick.

Whichever Republican candidates decide to jump into the race, they will be starting way behind Newsom and state Treasurer John Chiang, who have both been running and fundraising for awhile. As of September, Newsom had $6.3 million in his campaign account, while Chiang had $2.2 million as of August.

Both Faulconer and Swearengin benefited heavily in the poll from party identification — both dropped to single digits when polled on just name ID alone. But it’s still very early in the race, said John J. Pitney, Jr., a Roy P. Crocker professor of politics at Claremont McKenna College.

“These results reflect name recognition and partisan identification more than serious evaluation of the candidates,” Pitney said. “The good news for Republicans is that, although Faulconer and Swearengin are not running ahead, they have a chance of making the top two. The bad news is that the Democrats will be able to run well-funded campaigns.”

Pitney pointed to the 2014 Republican gubernatorial candidate, Neel Kashkari, who struggled with fundraising despite having contacts throughout the business and financial community from his time as an investment banker and top Treasury Department official.

In 2014, Kashkari raised only slightly more than Newsom has now two years out, largely due to being seen as not having a strong shot of winning (although he was running against a popular incumbent, Gov. Jerry Brown).

“Look at Kashkari,” Pitney said. “He had extensive contacts in the business/financial community, but could not fill his warchest because nobody thought he could win.”

Antonio Villaraigosa, the former mayor of Los Angeles, and Delaine Eastin, the former state superintendent of public instruction, have both announced their intentions to run. Eastin was not included in Tuesday’s poll, while Villaraigosa drew 6 percent. Chiang was near the bottom at 2 percent.