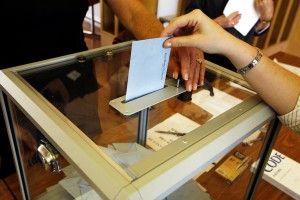 Republicans’ chances of fending off a Democratic supermajority in the Legislature dwindle by the day.

The linchpin is one Southern California Senate district, where Republican Assemblywoman Ling Ling Chang has a narrow lead over Democrat Josh Newman in the race to replace the former Senate Minority Leader Bob Huff, who is termed out.

While Chang holds a lead, she’s losing ground every day. Last Wednesday, Chang led Newman by around 5,000 votes. The next day, her lead dropped to 3,500 votes.

On Monday, it was less than 200 votes, according to the Secretary of State.

A two-thirds “supermajority” would give Democrats the power to bypass Republican support to pass emergency legislation and put constitutional amendments on the ballot, among other privileges.

“It is important,” said Eric Bauman, vice chairman of the California Democratic Party, noting that there’s a certain level of “bragging rights” that come with the power as well.

There are around 92,000 ballots uncounted in Orange County, where the bulk of SD29 voters live.

County election officials must report final results to the state by December 9, which will certify the results by Dec. 16.