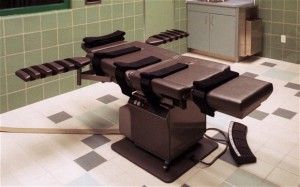 A measure to speed up executions in California was projected to pass Tuesday night, according to the Associated Press.

Proposition 66, which aims to cap death-sentence appeals at five years, stands at 51.1 percent of the vote. While such a slim margin of victory would usually suggest the electorate is divided, a competing measure to end the death penalty altogether was rejected by 53.4 percent of voters (ballots are still being counted, so totals may change).

“California voters not only want to keep the death penalty intact but they want it to work as intended,” said Anne Marie Schubert, Sacramento County district attorney, who called Prop. 66’s lead “insurmountable.”

Prop. 66 speeds up the appeals process by expanding the number of courts and attorneys able to hear and try death penalty appeals to meet a five-year cap on the appeals process that currently takes decades. A court order[1] could be sought when cases drag on.

In a cycle when voters chose a cornucopia of liberal policies, like implementing a $2-per-pack tax on cigarettes, extending a tax on the highest incomes, legalizing recreational marijuana, placing further restrictions on guns and ammo and upholding a ban on plastic bags, the death penalty position stands out.

In fact, voters at the same time resoundingly approved a measure that would allow (but not guarantee) early parole for thousands of “non-violent” inmates, showing that Californians’ soft spot hardens when it comes to those considered the worst of the worst.

“Californians have long been a bit schizoid when it comes to the death penalty,” said John J. Pitney, Jr., a Roy P. Crocker professor of politics at Claremont McKenna College.

Pitney recalled Democrat Dianne Feinstein’s campaign ad [2]from the 1990 gubernatorial race. Feinstein, who is currently a U.S. senator, but at the time had just finished a second term as mayor of San Francisco, pitched herself as pro-choice, pro-environment and “the only Democrat for governor for the death penalty.”

While some debate the morality of the death penalty, others argue it is an ineffective policy.

According to data provided by the Legislative Analyst’s Office, no one has been executed since 2006. The vast majority of Death Row inmates will die of other causes long before the state kills them (Prop. 66 will presumably speed this process up, although there’s still legal complications with the lethal injection process).

And it’s costly: The state spends $55 million each year on death penalty appeals, for both prosecutors and court-appointed defense attorneys.

Opponents use the inefficiency and cost of the current system as grounds for abolition of the death penalty. But that may have ultimately been their undoing, said Pitney.

“In recent years, opponents of the death penalty have argued that it is too inefficient and costly,” Pitney said. “That argument may have backfired, at least in this state. Instead of abolishing it, voters backed a measure to make it more efficient.”