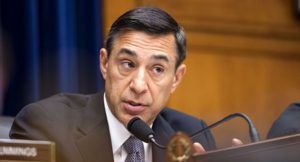 Darrell Issa is projected to win a ninth term in Congress, according to the Associated Press, despite an unexpectedly strong challenge in an unpredictable election cycle.

The Vista Republican, who had been a constant thorn in the side of the Obama administration in recent years as chair of the House Oversight and Government Reform Committee — a position he recently rotated out of — had just a 2,348-vote lead as of Monday afternoon.

Democrats had made this race a top priority, with a flood of national money and even attention from President Barack Obama himself, buoyed by dreams of either taking back the House or at least seriously cutting into Republicans’ 59-seat advantage — neither of which happened (Democrats did win a handful of seats, however).

It would have been particularly satisfying for Democrats to knock out the person who led congressional investigations into the fatal attack on the U.S. consulate in Benghazi, the troubled roll-out of the federal Obamacare exchange, Lois Lerner and the IRS, and the ATF fiasco called “Operation Fast and Furious,” among other things.

Issa was challenged by Democrat Doug Applegate, a retired Marine Corps colonel with no prior political experience. Applegate was initially thought to have no chance against Issa, the wealthiest member of Congress. But when Issa squeaked through the primary with only 51.5 percent of the vote, it became clear he was in trouble. In the end, Issa did enough to survive.

“Our campaign overcame a historically difficult environment, $7 million in special interest spending and even President Obama personally campaigning in our district,” said Issa spokesman Jonathan Wilcox. “Congressman Issa stood strong throughout, and his is a victory well-deserved.”

While Orange and San Diego counties report thousands of votes are still uncounted, AP reported the number in Issa’s district was small enough to call the race.