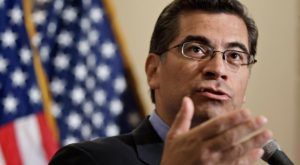 Becerra, who would need to be confirmed by the Legislature, would fill the impending vacancy left by Kamala Harris, who was elected to the U.S. Senate last month. The nomination will not be official until Harris resigns.

“Xavier has been an outstanding public servant – in the state Legislature, the U.S. Congress and as a deputy attorney general,” Gov. Brown said in a statement. “I’m confident he will be a champion for all Californians and help our state aggressively combat climate change.”

Prior to being elected to Congress in 1992, Becerra served one term in the state Assembly. He also served several years as deputy attorney general.

“Governor Jerry Brown has presented me with an opportunity I cannot refuse,” Becerra tweeted.

What it means for the state

The pick breaks up the Bay Area’s stranglehold on statewide offices – only two of the eight statewide elective office holders are from outside the Bay Area. Becerra, from Los Angeles, will be the third.

The pick also ends months of speculation, which at times suggested Brown would pick his wife, Anne Brown Gust (Brown dismissed those rumors). Becerra’s name had not been previously mentioned, but the timing coincides with House Democrats’ leadership elections earlier this week.

Becerra, the fourth highest ranking Democrat in the House, for years has been limited by leadership’s glass ceiling and Nancy Pelosi’s re-election as minority leader this week only reaffirmed that Becerra had limited options.

Becerra was set to be forced out of leadership, having served his two terms. He had been seeking the top Democratic spot on the House Ways and Means Committee.

If confirmed, Becerra leaves his own vacancy and shakes up the 2018 statewide elections.

Becerra has not announced any intentions beyond accepting the appointment, but as a statewide officeholder, he would have a bigger platform to run for the attorney general (of which he’d be a frontrunner as the incumbent) and possibly governor or Senate, should incumbent Dianne Feinstein decide to step down.

CQ Roll Call reported[1] that soon after Brown’s announcement, former Assembly Speaker John A. Perez announced his intention to run for Beccara’s spot in Congress. The seat is safely Democratic — Becerra had just been re-elected with 77.2 percent of the vote against a fellow Democrat.

“In the aftermath of November’s election nationwide, two facts are clearer than ever,” Perez said in a statement, according to CQ Roll Call. “The first is that we need to fight harder than ever to protect the progress we’ve made. The second is that California is the one place in the country where Democrats know how to win, and the one place in the country where government is working.”

Earlier this week, Perez had told Politico[2] he was mulling a run for chairman of the Democratic National Committee.

Becerra should face an easy confirmation in the Legislature, which is overwhelmingly run by Democrats. Following Brown’s announcement, Assembly Speaker Anthony Rendon sent his support.

“With his long record of public service in the Attorney General’s office, the Assembly, and Congress, Xavier Becerra clearly has the experience to step into this vital role,” the Paramount Democrat said in a statement. “Just as important, he has great tenacity and he respects the rights of all Californians — much-needed qualities for an Attorney General given the troubling times ahead. I applaud Governor Brown for making this bold and inspired choice.”