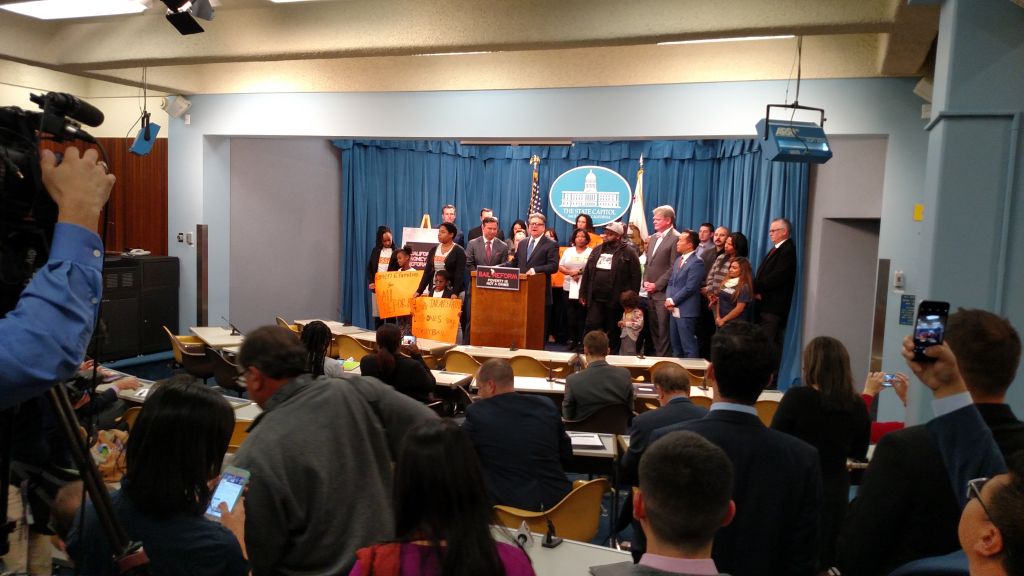 SACRAMENTO – At a press conference in the Capitol on Monday morning[1], California Lt. Gov. Gavin Newsom explained that although he has long championed various reforms to the state’s criminal-justice system, he had in the past rarely even thought about the “money bail” system by which criminal defendants are released from jail after posting a bond.

Indeed, the system is so ubiquitous – bail-bonds offices cluster around courthouses – that it’s just an accepted part of the system. Yet that could all be changing. As Calwatchdog reported last month[2], reforming the state’s bail system will be a top priority as legislators return to the Capitol. Sure enough, the press conference was held shortly before the new session came to order and included several prominent Democratic legislators.

After an arrest, a judge will typically set a bail[3] amount based on the seriousness of the alleged crime and on the defendant’s perceived flight risk. The defendant can post the full amount or pay a bondsman 10 percent of the bail, which is nonrefundable. The bail company assumes the financial risk if the defendant is a “no show.” The bond is meant to provide a strong financial incentive for the defendant to show up at the appointed court date.

But Newsom and the assembled legislators argued that the current system is antiquated and unfair – the “modern equivalent of debtors’ prison,” as sponsors of a reform bill put it. “We punish poor people literally for being poor,” argued Assemblyman Rob Bonta, D-Oakland[4]. “In many cases, if you have enough money to pay your bail, you can get out of jail regardless of whether you are a danger to the public or a flight risk.”

And the converse is true, supporters say: Those who are poor but pose little danger or flight risk must stay in jail until the wheels of justice turn. They often turn slowly, which means people in tough financial straits risk losing their job, their home and their car as they languish in a jail cell. A single parent risks losing his or her children to Child Protective Services. It’s a tough burden for those who have not been found guilty of a crime.

It’s the first day of session[5], so the legislation includes intent language: “It is the intent of the Legislature to enact legislation to safely reduce the number of people detained pretrial, while addressing racial and economic disparities in the pretrial system, to ensure that people are not held in pretrial detention simply because of their inability to afford money bail.”

Legislators say their intent is to “reform” the system, but appears the ultimate intent is to move to a risk-based system of the type embraced by the federal government and some local jurisdictions such as Washington, D.C. In other words, details are still hazy, and the bail-bonds industry has plenty of time to gear up for what could pose an existential threat.

The industry has argued[6] that it offers an economical system that minimizes the costs to the court system. That’s because bond companies privately assure – without extensive court monitoring – that defendants show up for their trial. But critics argue that far more people remain in jail than would be the case with a risk-based assessment – and that the jail costs (around $100 a day in California) counteract any other savings.

The California legislation is part of a nationwide movement by civil-rights and civil-liberties groups to change the pretrial system across the country. The focus is less on cost savings than on justice-related issues. As a 2013 research paper from the Laura and John Arnold Foundation[7] explained, “A study, using data from state courts, found that defendants who were detained for the entire pretrial period were over four times more likely to be sentenced to jail and over three times more likely to be sentenced to prison than defendants who were released at some point pending trial.”

The reason? Those in jail awaiting trial are “more likely to cop a plea,” said Sen. Bob Hertzberg, a Van Nuys Democrat and co-author of the legislation. If a defendant is in jail awaiting trial, and faces the prospect of losing everything he or she owns, then there’s intense pressure to do something – anything – to get out. An arrest doesn’t mean guilt, so a person out on bail can continue life as usual while the process plays out. Hertzberg’s office notes that “63 percent of inmates in county jails are awaiting trial or sentencing.”

The bail-bonds industry points to a U.S. District Court decision[9] in October that slaps down the due-process criticisms made by bail reformers. “The state’s interest in ensuring criminal defendants appear for trial dates is a legitimate one, and detaining individuals before their arraignment is rationally related to that legitimate interest,” rule Judge Troy Nunley.

Furthermore, the industry-backed American Bail Coalition argues that “surety bail outperforms every form of public sector pretrial release and own recognizance release as well.” In a July article, the Washington Post[10] evaluated the District of Columbia’s pretrial system, which uses risk assessments rather than bail. It interviewed those who found the system to be a success, but also pointed to a couple of “high-profile lapses,” including an incident where “a man released from court on a misdemeanor charge of assaulting a police officer was charged in a fatal stabbing two days later on a Metro train.”

Bail reformers point to cases of people who have been killed or committed suicide while in pretrial detention. The Arnold Foundation report[11] pointed to a study showing “that low-risk defendants who were detained pretrial for more than 24 hours were more likely to commit new crimes not only while their cases were pending, but also years later.”

This obviously is a complicated issue, and the stakes are high given that people’s lives are in the balance. It’s particularly germane in California, given that the state’s historic realignment – moving state prisoners to local jails, to conform to a federal prison overcrowding order – puts an increasing premium on jail space. This much seems likely: More Californians will be thinking about the bail-bonds system as the new session gets underway.