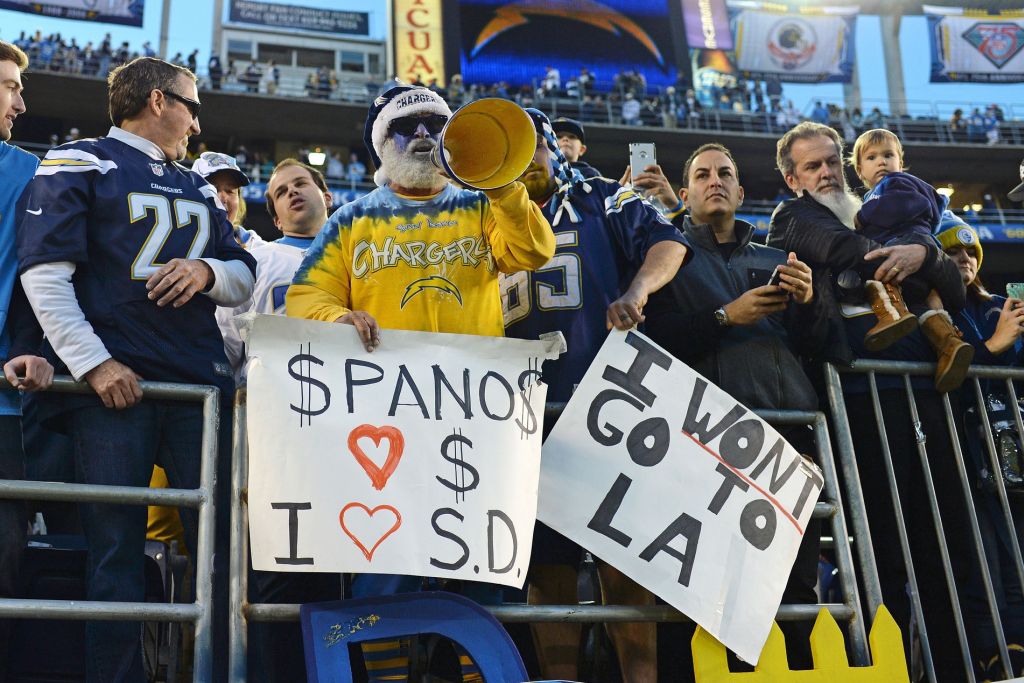 After months of relative certainty that the National Football League wanted the Rams in Los Angeles and the Chargers in San Diego, expectations have been gradually upset, turning the other former L.A. team’s relocation back to the City of Angels all but a done deal.

The proximate cause of the shift, always a factor in the team’s fate, was the failure of a new stadium deal to pass muster with San Diego voters in November. In the ensuing weeks, the team has acted swiftly to put an executable plan in place for a timely move to L.A. The first step in making the scheme a reality was locking down a place to play, and “[t]he agreement with the Chargers to lease the as-yet-to-be-built Inglewood stadium has been executed and sources say, soon to be signed,” according[1] to NBC Los Angeles. That deal itself was only possible because the groundwork had been laid back when the first pro team’s return to L.A. was finalized. “The Rams signed an agreement with the NFL before moving to Los Angeles agreeing to lease space to another team,” the network added.

A need for fans

Still, potential obstacles to an expeditious relocation have captivated the sports press, especially online, where frustration with the Chargers’ recent poor play has been aired as a factor that could complicate the League’s calculus around an L.A. move. “Once again this past week, speculative media reports surfaced outside of San Diego expressing near-certainty that Dean Spanos will move the team to greater Los Angeles in 2017,” U-T San Diego observed[2].

“Once again, no one was identified as the source of the speculation. (Chargers spokesman Mark Fabiani again said Spanos hasn’t made up his mind.) The League may be overplaying its hand here. L.A. doesn’t want the Bolts.”

Anecdotal evidence of a sour mood among Angelenos has not been overwhelming, but it has been put under a spotlight. Steve Reed, sports writer for the Associated Press, recently quoted[3] one L.A. fan on Twitter who implored the Chargers to “please stay in San Diego. One bad football team in L.A. is enough.”

Even the risk of over-saturating L.A.’s market could provoke the League to grow more cautious, impose delays or otherwise allow the potential deal to drift. NFL ratings have tanked over the course of 2016, with potential culprits including the politicization of the game by players, the league’s punishment of on-field celebrations, the presidential campaign season and the health risks now more closely associated with players’ concussions.

Evidence does suggest that the Clinton-Trump matchup put a real damper on fans’ enthusiasm. “Since the election, national NFL games across broadcast and cable are averaging an audience of 18 million viewers,” Fox Business reported[4], citing Nielsen data. “That’s a nearly 17 percent increase from the period from the start of the season up until the election, when national NFL games drew an average of 15.4 million viewers.”

In an internal memo this October, the network noted, executives Brian Rolapp and Howard Katz downplayed concern that the League faced a fundamentally changed business landscape. “Prime-time windows have clearly been affected the most, while declines during the Sunday afternoon window are more modest. While our partners, like us, would have liked to see higher ratings, they remain confident in the NFL and unconcerned about a long-term issue.”

Nevertheless, the League would suffer a potentially costly and high-profile embarrassment were the Chargers not to connect with L.A. and Orange County fans, who have a broad range of non-football pro teams to support and lack the recent traditions of stalwart support that many other cities with struggling NFL franchises and fewer sports options have nurtured for generations.