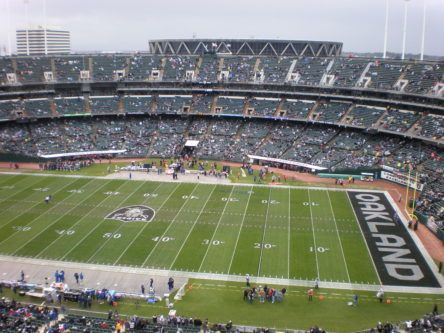 As CalWatchdog reported [1]earlier this week, the San Diego Chargers are much closer to moving to Los Angeles, having gotten the formal blessing of team owners at a meeting in Irving, Texas, to leave if they choose by the Jan. 15 deadline the NFL established a year ago. But the situation in Oakland with the Raiders seems cloudier — at least in California media, as opposed to websites that specialize in the NFL.

With the Raiders, the seeming good news for fans who want the team to stay starts with the fact that the Oakland City Council and the Alameda County Board of Supervisors appear enthusiastic [2]about working with Fortress Investment Group, which is led by NFL Hall of Famer Ronnie Lott and billionaire investor Wes Edens, on a stadium plan. On Bay Area talk radio, supporters of the plan have dropped hints of having deep-pocket supporters who might come forward to minimize how much taxpayers would have to pay for the billion-dollar-plus new stadium the Raiders and the NFL want.

NFL officials who have criticized San Diego officials for their response to the Chargers’ stadium needs are offering praise for what’s happening in Oakland.

ESPN reported this week that the league told Oakland’s leaders to not worry about the threat the team would leave even though Nevada state leaders have committed to provide $750 million in public funds for a $1.9 billion NFL stadium in Las Vegas. The team would only have to pay $500 million toward the stadium, with the rest of the tab largely picked up by Las Vegas Sands chairman and CEO Sheldon Adelson. One of the world’s richest persons, Adelson hopes to end up a minority or majority owner of the team.

The implication of the remarks by NFL executive Eric Grubman to ESPN is that the league very much wants the Raiders to stay in Oakland even if a better deal is available in Las Vegas. When allowed to comment anonymously, officials with other NFL teams have said that the league should be wary of having a team in the city that is the capital of American sports gambling.

Raiders may sue to leave if NFL owners say no

But optimism about Oakland keeping its team is less apparent on Pro Football Talk, a niche website now affiliated with NBC Sports that has broken dozens of stories in recent years because of its network of NFL insider sources. Site founder Mike Florio wrote this week[3] that Adelson and Raiders owner Mark Davis were struggling to finalize a deal that would bring the team to Las Vegas.

But Florio has long depicted the Raiders’ exit as close to a done deal. On Nov. 22, he reported [4]that Davis would sue the NFL to allow his team to move to Las Vegas if he could not get the support of three-quarters of the league’s 32 owners to relocate his team, as NFL bylaws require.

Davis’ father, NFL Hall of Famer Al Davis, successfully sued [5]the league after it sought to block him from moving the team from Oakland to Los Angeles, where it played from 1982 to 1994 before moving back to Oakland.

Florio has interviewed Mark Davis dozens of times off the record. While he honors the rules and doesn’t quote Davis directly, the impression his coverage always gives is that the Raiders owner sees becoming the first major pro sports franchise to set up shop in Las Vegas — a tourist-centered metropolitan area with 2.1 million residents — as akin to a no-brainer.

Many reporters have also made the obvious point that the Raiders’ image as edgy, unconventional outsiders conforms with Las Vegas’ image.

Florio believes a final decision[6] will be made by September.