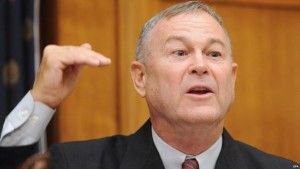 The Costa Mesa Republican denounced a recent announcement from UC[1] that campus police would not be cooperating with federal officials in deportation efforts of undocumented immigrants.

“Your commitment to spending scarce resources to finance people illegally present in the United States is unacceptable and a flagrant misuse of taxpayer money,” Rohrabacher wrote. “This is an insult to Americans and legal immigrants who pay your salary.”

While sanctuary policies align with the state’s liberal lean, one of the main policy reasons supporters turn to is that by creating a space where deportation is off the table, undocumented immigrants are more likely to cooperate with police in other investigations.

“It is in the best interest of all members of the UC community to encourage cooperation with the investigation of criminal activity,” according to the UC statement. “To encourage such cooperation, all individuals, regardless of their immigration status, must feel secure that contacting or being addressed by UC police officers will not automatically lead to an immigration inquiry and/or a risk of removal.”

The UC system gets more than half of its research funding from the federal government, which Rohrabacher claimed is jeopardized by resistance to the upcoming administration.

“I assure you that, in the next session of Congress, those who receive and spend federal dollars in a manner that includes people illegally present in our country will find it difficult to obtain those funds,” Rohrabacher wrote.

The issue of sanctuary campuses is a small part of a bigger showdown between California and President-elect Donald Trump. While Trump campaigned heavily on a tough stance on immigration — which included mass deportation and the construction of a wall along the country’s southern border — California Democrats have since announced their intention to fight those efforts at every turn.

Though Rohrabacher initially supported a different candidate in the Republican primary, he eventually came around to Trump with a full-throated endorsement, even going so far as to call other Republicans “gutless”[2] who backed away from Trump at times of turmoil. His name was even floated as a potential candidate for secretary of state, although he was not chosen.