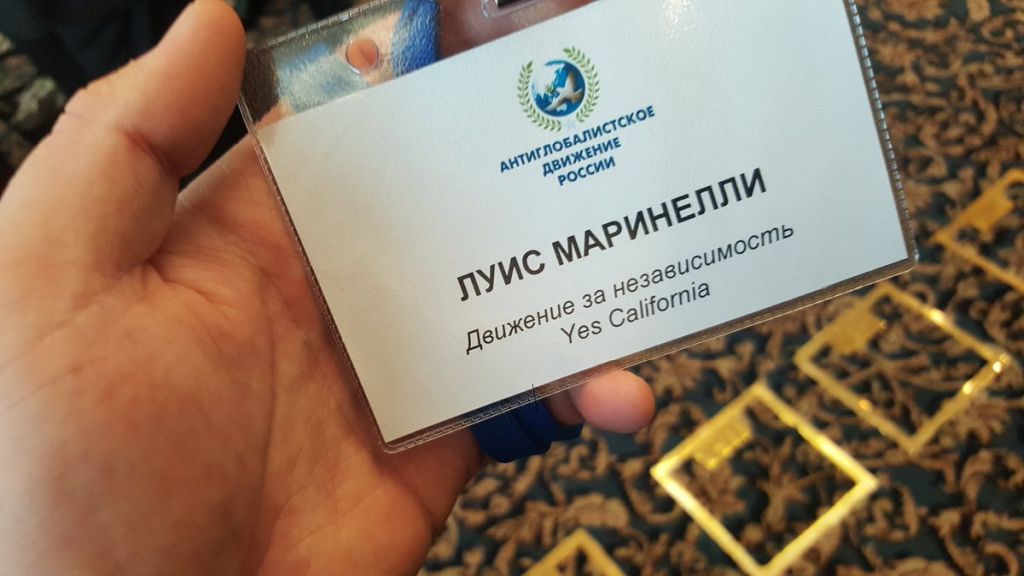 The campaign to place California secession on the ballot next election year entered uncertain waters as news broke that its mastermind lives and works in a city in the center of Russia.

“I immigrated to California, and I consider myself to be a Californian,” Louis Marinelli told The California Report from his Yekaterinburg apartment, KQED reported[1]. “I wanted to handle some personal issues in my family, regarding immigration. My wife is from Russia. I’m here handling various personal issues. But at the same time, we have some political goals we can achieve while I’m here.”

From founding to funding

Marinelli’s deep Russian ties, past and present, attracted attention as he took his current stay in the country as an opportunity to start work on a so-called “embassy of California” in Moscow. That undertaking, as Bloomberg noted[2], has the aid of “a vehemently anti-American group supported by the Kremlin” — the Anti-Globalist Movement of Russia — which Marinelli said supports California’s right to self-determination. “Talking to the Russian tabloid Life, Alexander Ionov, the president of the Anti-Globalization Movement of Russia, said that the embassy would serve as a hub to boost tourism and foster cultural and economic exchanges between the Golden State and Russia,” Heat Street reported[3].

“We may disagree on several issues, but if we have common ground on one issue, why shouldn’t we have a dialogue?” Marinelli asked Bloomberg. But he has already begun to hit against the limits of that rhetoric.

“Marinelli’s Russian connection has created a schism, if not quite the Great Schism, in the breakaway movement with members of the California National Party, a group that is formally affiliated with Yes California but has publicly disavowed Marinelli as a Russian marionette. Silicon Valley investor and Hyperloop co-founder Shervin Pishevar briefly became another standard-bearer of ‘Calexit,’ as it come to be known, threatening Marinelli’s virtual monopoly on the cause, but backed off, saying he didn’t really support secession.”

But crisis management was not the only reason Yes California accelerated its timetable to land their initiative on the California ballot in 2018. (According to the prospective measure’s language, voting yes “would trigger a special election the following March in which residents would decide if ‘California should become a free, sovereign and independent country,'” as the San Jose Mercury News observed[4].) Donald Trump’s election provoked a degree of dismay among some California Democrats intense enough to suggest a secessionist movement could take advantage while passions remained relatively hot.

“It wasn’t until Trump’s victory last month that mainstream U.S. outlets — including the Sacramento Bee, the L.A. Times and NPR — covered the group more seriously,” KQED noted. “The story got new legs because several influential tech figures took to Twitter to voice their desire for California to leave the union after Trump’s election. Among them was Shervin Pishevar, an investor and co-founder of Hyperloop One, a startup promoting a futuristic new transportation technology.”

Although no elected officials have promoted the breakaway effort, tempers have flared around the idea that a Trump presidency would try to stymie state Democrats, seen by many party members nationwide as a progressive vanguard on social and environmental issues.

In a recent San Francisco speech before the American Geophysical Union, for instance, Gov. Jerry Brown vowed to press ahead with the state’s current climate policy regardless of what happens in Washington. “If Trump turns off the satellites, California will launch its own damn satellite,” he said, according[5] to the IBTimes. “We’ve got the scientists, we’ve got the lawyers and we’re ready to fight.”

Despite the flurry of attention, from Russia, Marinelli’s personal political reach in California was likely to remain limited. To date, his track record has been spotty. He “filed a handful of statewide ballot measures related to secession in 2015 and none qualified for the November ballot,” the Sacramento Bee recalled[6]. “He also waged an unsuccessful campaign to represent state Assembly District 80, but didn’t advance beyond the June primary.”