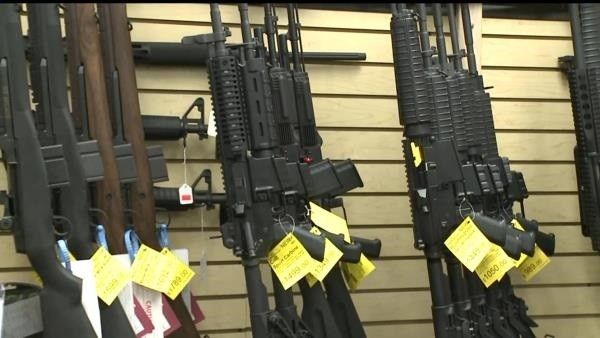 Unwilling to be locked out of the gun cabinet by Sacramento Democrats, California residents have pushed gun purchases up to record numbers, leaving latecomers to the trend in the lurch. But as the state Legislature added fresh restrictions, developments in the courts painted a murkier picture that could impact interpretations of federal law around the United States.

Over the course of the year, lawmakers spearheaded a suite of measures designed to further tighten the screws on the California gun market, which has long been subject to progressive constraints. “The new gun control legislation, six bills signed by Gov. Jerry Brown in July, was a boon to 2016 gun sales already on an upward trend,” as the Press Democrat noted[1]. Voters followed on the action by toughening things further at the ballot box:

“Nearly one million firearms were purchased in California as of Dec. 9, the most recent state data available, compared to just over 700,000 guns sold in all of 2015. Sales have likely soared beyond one million guns since then. Semiautomatic rifle sales have more than doubled. The California Department of Justice reported 364,643 semiautomatic rifles had been sold by Dec. 9. Only 153,931 rifles were sold last year.”

Shoppers have raced to acquire firearms that won’t be available for legal purchase after the raft of new legislation takes effect. “Rifles with bullet buttons for the quick swap of ammunition magazines and other soon-to-be banned features have also skyrocketed,” the San Jose Mercury News reported[2]. “Statewide sales are up 40 percent by early December. The new gun controls reclassified semi-automatic rifles that have certain features as assault weapons. The features added to the prohibited list include a protruding or forward pistol grip, a thumbhole stock, a folding stock or a flash suppressor.”

Although rifles with bullet buttons will be banned from sale as a result of their reclassification as so-called assault weapons, it will remain legal to own and possess them.

As has been the case with issues such as immigration and minimum wages, California municipalities have in some instances gotten out ahead of the state on gun control. In San Francisco, a federal appeals court recently agreed that an 11-judge panel would “review a challenge to an Alameda County ordinance that restricts the locations of gun stores in March,” according[3] to CBS San Francisco. “The challenge was filed in 2012 by three businessmen who wanted to open a gun and firearms training store in an unincorporated part of San Leandro that was found by county zoning administrators to be within 500 feet of a residential area.”

More than just Alameda County law could be at stake, officials quickly argued. “Lawyers for Alameda County said 17 other cities and counties in California regulate the locations of commercial gun dealers, including San Francisco — which has a 1,000-foot buffer zone — as well as Oakland and Contra Costa County,” the San Francisco Chronicle observed[4]. “State Attorney General Kamala Harris’ office said a ruling allowing a constitutional challenge to the local restrictions could also imperil state laws regulating commercial gun dealers’ licensing, inspection, monitoring, storage methods and delivery of firearms.” The Alameda regulation was made law in 1998, but the crux of the controversy will implicate a key part of the most recent landmark gun ruling to come down from the nation’s highest court. As the Chronicle noted, the Alameda case “is one of many pending in federal courts over the meaning of the 2008 Supreme Court decision that declared a constitutional right to possess firearms at home for self-defense.”