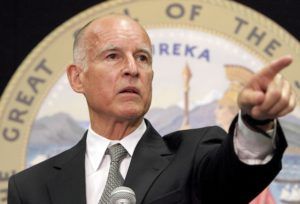 Gov. Jerry Brown preached prudence on Tuesday as he unveiled his 2017-18 state budget, proposing no new major spending programs while taking a wait-and-see approach to the incoming Trump administration, even as other prominent California Democrats brace for the unknown.

The budget showed a $2 billion deficit — modest by historical standards, but worthy of the lawmakers’ attention — caused by an increase in government programs over the last few years and lagging revenues.

Brown said he didn’t want to “repeat mistakes of the past,” recalling the days of the state’s budget crisis. The proposed budget showed approximately $8 billion in the Rainy Day Fund by the end of 2017-18, which is 63 percent of the constitutional target, which Brown said was bigger than it seemed as he called for greater savings now.

Independent analysts, as well as Brown’s budget experts, have cautioned against the state’s over-dependence[1] on the wealthiest residents to fund the government. Brown lauded the state’s “progressive” tax system, where people with the most pay the most. But he said it also requires prudence.

“It doesn’t make sense to pretend we have money when we really don’t,” Brown said.

Recently, many prominent Democrats staked out positions as Trump antagonists, in interviews and even with the Legislature’s hiring of former U.S. Attorney General Eric Holder[2]. Brown took a more measured approach by saying money wasn’t moved around to certain areas in anticipation of Trump, but left the door open for the May budget revision.

Brown seemed confident that the Affordable Care Act, which has expanded coverage to millions of Californians, wouldn’t go anywhere, noting that any repeal-and-replace proposal would have to get Democratic support in the Senate and that cutting health care for millions of people would be political suicide for Trump.

In response to the ongoing infrastructure funding woes, Brown proposed a “road improvement charge” of $65 per vehicle. In other car-related news, the gas tax will increase 2.1 cents per gallon automatically.

As for housing, one of the other major unresolved issues facing the state, Brown proposed to re-appropriate an unused $400 million in funding for housing that was set aside in the last budget.

The budget does send $3.2 billion to local municipalities for affordable housing projects, but Brown said more needed to be done to spur housing development by cutting red tape, cutting delays and cutting “whatever expenses we can do without.”

“We have to bring down the cost structure of housing, not just subsidize,” Brown said.