State finds savings in minimum wage increase, but counties get the bill 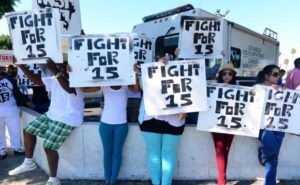 The good news: Last year’s deal to increase the minimum wage won’t cost the state nearly as much as was projected.

The Brown administration is ending a program that coordinated care for seniors and low-income families because it was no longer cost effective. As a result, the state will save $626 million this year, forcing counties to pick up the check.

The Coordinated Care Initiative allows Californians who are eligible for both Medi-Cal and Medicare to “receive medical, behavioral health, long‑term services and supports, and home and community‑based services coordinated through a single health plan,” according to the budget document released Tuesday[1].

But the law allows the Department of Finance to end CCI if it is deemed no longer cost effective. Federal regulations requiring in-home caregivers to receive overtime after 40 hours per week drove the cost of the program up with the minimum wage hike.

Last year, state analysts estimated the plan to gradually increase the minimum wage to $15 per hour would cost the state[2] $4 billion by 2021. Cutting the CCI program will lower the state’s burden to $2.6 billion, according to a Department of Finance official.

Cutting the program will shift the labor costs onto the counties, which is estimated to cost more than $4.4 billion over the next six years, according to[3] the California State Association of Counties.

“This would be devastating to counties all over the state,” CSAC President and Alameda County Supervisor Keith Carson said in a statement. “We undoubtedly would have to make cuts in other vital social services to cover these costs.”