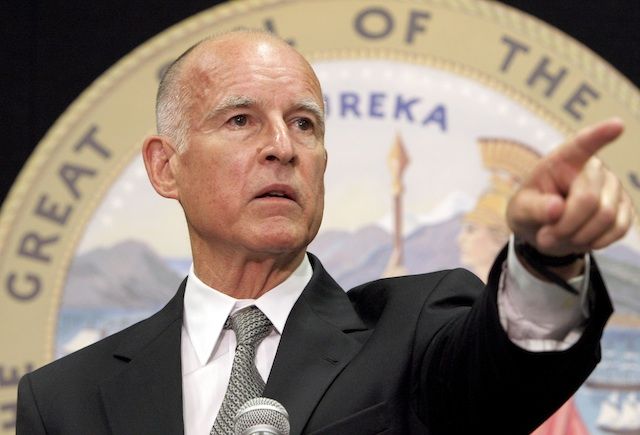 Jerry Brown teetered between conciliatory and defiant in his annual State of the State address on Tuesday.

The popular Democratic governor echoed other Democratic leaders in the state by taking shots at Republican President Donald Trump and congressional Republicans and their proposed, yet sometimes vague, agenda.

On the day Trump pushed through two controversial oil projects opposed by environmentalists, with a repeal of the Affordable Care Act slowly working through Congress and with federal action on immigration looming on the horizon, Brown pointed to the battle lines drawn between the state and the federal government.

“While no one knows what the new leaders will actually do, there are signs that are disturbing,” Brown said. “We have seen the bald assertion of ‘alternative facts.’ We have heard the blatant attacks on science. Familiar signposts of our democracy – truth, civility, working together – have been obscured or swept aside.”

Yet the tone wasn’t entirely combative, compared to legislative leaders. Brown lauded Trump’s plans for massive investment in infrastructure (“Amen to that, brother”) and highlighted bipartisan accomplishments in the state, like the creation of the rainy-day fund and the water bond.

Brown also drew a stark contrast with Hillary Clinton, who, during the campaign season, referred to half of Trump’s supporters as a “basket of deplorables.”

“Democrats are in the majority, but Republicans represent real Californians too,” Brown said. “We went beyond party when we reformed workers’ compensation, when we created a rainy-day fund and when we passed the water bond.”

Brown lauded accomplishments during his governorship, which included increasing education funding, passing climate-change legislation, removing a substantial budget deficit and adding millions of people to insurance plans through both Medi-Cal and private policies.

A significant portion of the speech was devoted to immigration, noting immigrants are “an integral part of who we are and what we’ve become.” Brown called attention to some of the state’s immigration initiatives, like the Trust Act[1] and a measure issuing driver licenses to undocumented immigrants, saying “we may be called to defend those laws and defend we will.”

“Whether it’s the threat to our budget, or to undocumented Californians, or to our efforts to combat climate change – or even more global threats such as a financial meltdown or a nuclear incident or terrorist attack – this is a time which calls out for courage and for perseverance,” Brown said. “I promise you both.”