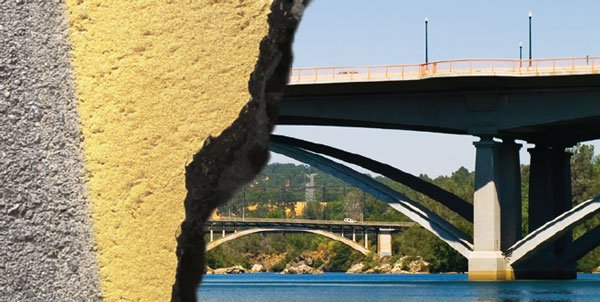 Dams aren’t the only part of California infrastructure on the hot seat. Following a big-ticket Sacramento request for federal building funds, a new report has concluded that the number of state bridges in dangerously inadequate condition reaches into the thousands.

“Of the 55,000 bridges across the U.S. that were deemed structurally deficient in a report published by the American Road and Transportation Builders Association, more than 1,300 California bridges fall under that category,” KCRA and the Associated Press reported[1]. “That means that of the 25,431 bridges in the state, 5 percent have one or more key bridge elements – deck, superstructure or substructure – that are considered to be in ‘poor’ or worse condition, the analysis found.”

Although the bridges haven’t been labeled near collapse, the numbers threw the sheer scale of California’s infrastructure woes – amid heavy costs on marquee projects like high-speed rail – into stark relief. “The state has already identified 4,075 bridges that need repair, which comes with a price tag of $12 billion,” the channel continued. “Across the country, ARBTA noted that deficient bridges are crossed about 185 million times a day. The top 14 most-traveled deficient bridges are in California.”

A near-catastrophe surrounding the potential failure of the state’s Oroville Dam has thrown additional light onto what California gets for its spending and doesn’t. “Shock over the emergency evacuation downriver from the Oroville Dam has given way to serious questions about how California is coping with its aging infrastructure – which the American Society of Civil Engineers says would cost the state a staggering $65 billion per year to fix and maintain after years of neglect,” the San Jose Mercury News observed.

Residents and officials are divided over where that kind of money should come from. “Gov. Jerry Brown has proposed investing $43 billion in infrastructure over the next five years, with the vast majority of the money going to transportation,” the paper added. “California voters approved a $7.5 billion water bond in 2014 for a range of needs from flood control to water storage, but that falls far short of needs for flood control and increasing the water supply.”

In fact, the state has drafted up a bid for $100 billion of federal infrastructure funding on over 50 projects, itemized in a letter from Gov. Brown to the National Governors Association. “Brown’s administration has pledged $4.3 billion of the state’s budget to go toward the repairs on the list, and has given legislative leaders a deadline of April 6 to submit candidates for any transportation funding,” the San Francisco Business Times reported[2]. “Other projects on the state’s list for federal funds include levees, reservoirs, bridges, ports, recycling centers, public transit upgrades and more veterans services operations.”

Oroville Dam wasn’t mentioned on the list; California’s stop-and-start high speed rail project, projected to run well over the budget authorized by voters, was. “The state said Saturday that repairs to the primary spillway at Oroville Dam — the nation’s tallest earthen dam — could run as much as $200 million but that was before critical damage to the emergency spillway,” CNBC noted[3]. “Repairs to both spillways are likely to run much higher than the rough estimate provided by the California Department of Water Resources.”

Although California’s once-cozy relationship with the White House, forged between leading state Democrats and Barack Obama’s administration, may be history, officials have made reassurances that their focus on infrastructure — a priority shared with president Trump — will not be in vain. “State Transportation Agency Secretary Brian Kelly told reporters he plans to meet soon with new federal Transportation Secretary Elaine Chao to discuss the wish list,” the Los Angeles Times reported. Chao, wife of Senate Majority Leader Mitch McConnell, won confirmation to the position as one of the most experienced and established members of Trump’s cabinet.