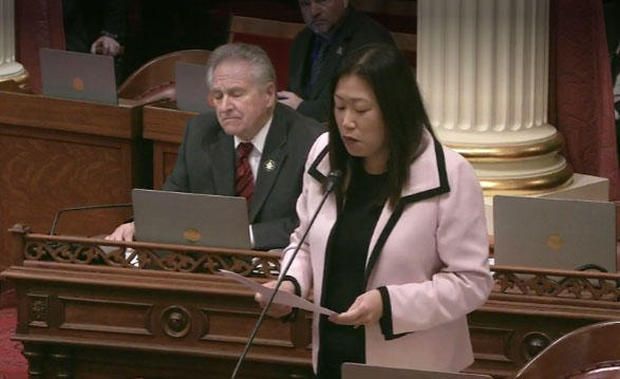 About 1,200 California Republicans are held their annual spring convention at the Sacramento Hyatt Regency this weekend and the star Saturday wasn’t featured speakers like Congressmen Darrell Issa of Vista or Devin Nunes of the San Joaquin Valley or high-profile media types like radio host Hugh Hewitt. It was state Sen. Janet Nguyen of Garden Grove, who wasn’t even planning to come to the event until asked at the last moment by state GOP leaders.

The invite was triggered by what happened Thursday. Nguyen, a Vietnamese refugee, took to the state Senate floor to criticize former California politician Tom Hayden, who died recently. It led to her being forcibly removed[1] for being out of order.

Many Vietnamese-Americans see U.S. anti-Vietnam War activists like Hayden and his former wife, Jane Hayden, as sympathetic with the ruthless communist government in North Vietnam that took over South Vietnam in 1975 after a long civil war, triggering a mass exodus that brought hundreds of thousands of Vietnamese refugees to the United States and Orange County in particular.

The symbolism of having Nguyen being forced off the Senate floor resonated with convention goers, who loudly applauded her delivery of the Pledge of Allegiance, the Sacramento Bee reported. She said she was trying to convey the sentiments of her constituents about Hayden, and noted that, “In the country I came from, that’s not allowed.”

“I stand with Janet” jacket lapels were everywhere at the Hyatt, the San Jose Mercury News reported[2]. The paper said the lapels were the idea of Shawn Steel, an Orange County Republican who is the former chairman of the California GOP.

Beyond the cheers for Nguyen, the main takeaway from Saturday’s speeches and events was the evidence of a general readiness to accept and root for President Donald Trump despite his series of controversies – but also quite a bit of ambivalence.

“It’s too early to tell,” Assemblyman Rocky Chavez, R-Oceanside, told[3] the Sacramento Bee said. “I think his Supreme Court pick is outstanding. I think his picks of Kelly, Mattis, Tillerson … and DeVos are very good.

“One thing I’d say I have a question with is his [opposition] to the Trans-Pacific Partnership [trade agreement]. When I listen to Trump talk about it he puts it strictly along the lines of a business negotiation. [It’s] much more than a business negotiation. It was an alliance to recognize the influence of China in the next 50 … years from now.”

“The way that we win a state like California is to blow up the narrative and smash the paradigm,” he said. “We have to bring people in — not on being Republican or Democrat but on being proud Californians.”

Sunday may be quieter than Saturday as the state GOP holds its formal general session to hear and vote on committee reports. There are fewer scheduled events[5] than day one and two before the convention concludes.