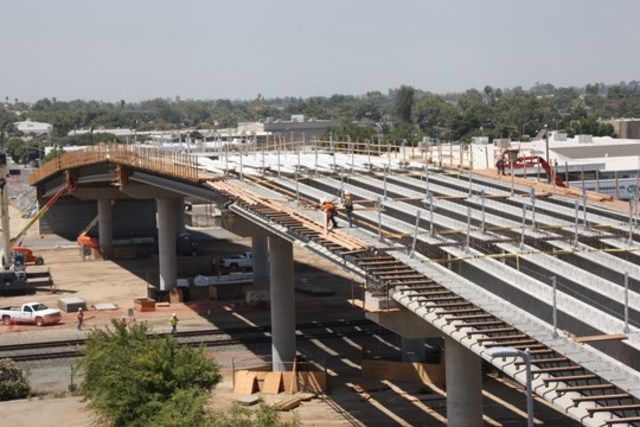 The new administration in Washington, D.C., has added another hurdle to California’s already difficult road to high-speed rail.

Drawing fire from Democrats and cheers from Republicans, the Department of Transportation “has deferred a decision on a $647-million grant that would help Caltrain electrify a section of track between San Jose and San Francisco, a project crucial to California’s struggling high-speed rail project,” as the Los Angeles Times noted[1]. “The decision not to approve the grant by a key Friday deadline may be an early sign of the Trump administration’s view of the bullet train project. The line is already under construction and will need significant federal funding moving forward.”

That funding has been coveted because of the additional grants it triggers if approved. “The federal grant, if it is ultimately awarded, would be matched by another $1.3 billion in local, state and regional investment, including funds from the high-speed rail agency,” the Fresno Bee reported[2].

Although the rail effort has been hamstrung by ballooning costs and time projections and repeated downward revisions of its original ambitions, Gov. Jerry Brown and his allies have labored to portray opposition as anti-innovation. With Democrats and Republicans at the federal level both making overtures to infrastructure reform, the governor swiftly sought to criticize the Transportation Department move accordingly. “If you’re not for that, you’re really not for infrastructure,” Brown told[3] Dan Morain of the Sacramento Bee. “The only thing you can say for that is it’s scoring political points by politicians that know better.”

Meanwhile, Caltrain itself has sprung into political action, pushing for a reconsideration. “In a petition to the White House, Caltrain is urging the administration to reverse course on its decision to halt $647 million worth of grant money for the transit agency until at least the fiscal 2018 budget,” The Hill reported[4]. “California officials say the delay could have a major impact on the economy and jobs in the region.”

“The move follows directly on the heels of a letter from 14 California Republicans, who pleaded with Transportation Secretary Elaine Chao to block the federal grants and argued that the money would be wasted,” the site added. “The letter was spearheaded by Rep. Jeff Denham, R-Calif., who chairs the House Transportation and Infrastructure subcommittee that oversees railroads.”

State and Congressional GOP have held a firm line against the bullet train, one of a relative few of big-ticket policies pushed by ruling Democrats that hasn’t tapped a very deep reservoir of public support. “Killing the project entirely before larger amounts of money are poured into it is probably the best taxpayers could hope for,” wrote[5] Baruch Feigenbaum of the Reason Foundation, summing up the standpoint of Golden State conservatives and libertarians.

“But that’s not likely to happen on Gov. Jerry Brown’s watch. Brown has been committed to creatively diverting money to the rail system and will continue to do so. So California should take a cue from President Trump, who has called for increased private-sector investment in infrastructure projects, and explore whether or not there are standalone sections of a high-speed rail system that make financial sense for private companies.”

Although the Department of Transportation did not put a timeline on how long its deferral of a decision on the train would last, it may also have to first decide whether to grant Republicans’ wish for tighter oversight over the project altogether. “Members of California’s GOP delegation had asked the Transportation Department to block approval of the grant to electrify a Caltrain line between San Jose and San Francisco until an audit of the bullet train’s finances is completed,” as the Bee reported[6]. “They said that providing additional funding to help the $64 billion high-speed rail project would be an irresponsible use of taxpayer dollars.”