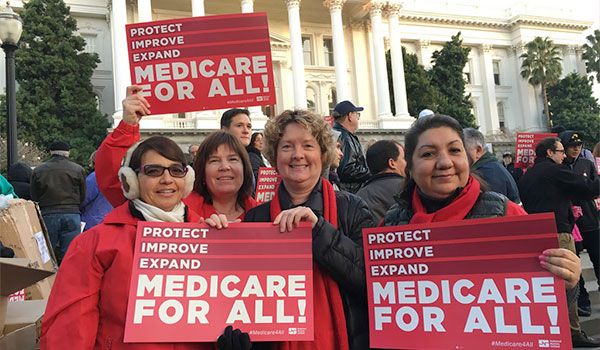 Sacramento Democrats have centered attention around a shot at universal health care for all Golden State residents.

Joined by state Sen. Toni Atkins, D-San Diego, state Sen. Ricardo Lara, D-Long Beach, introduced the Californians for a Healthy California Act, offering “a comprehensive universal single-payer health care coverage program,” as KPCC confirmed[2]. “Under this approach, private health insurance would be replaced with a single state-run program. Lara said his plan would guarantee coverage to all Californians and would bring down the cost of health care.” But advocates and critics hungry for specifics, the lawmaker conceded, will have to wait. “At the moment, Lara’s bill only says it is the ‘intent of the Legislature’ to establish a single-payer system. It does not say exactly how the program would work or how much it would cost.”

“It’s far from the first time this kind of system has been proposed in California. In 1994, voters rejected a ballot measure that would have established a single-payer system. The Legislature passed single-payer bills in 2006 and again in 2008, only to have Gov. Arnold Schwarzenegger veto the measures.”

Schwarzenegger’s veto was fueled by grim projections. “When the Legislature passed a single-payer bill in 2008 […] the legislative analysts found that those revenues would fall $40 billion short in the first year,” HotAir recalled[3].

Although the bill has created a sensation among California Democrats looking to make a national point with a state-level effort, precedent for success is weak. “In 2011, Vermont became the first U.S. state to agree to establish a single-payer program, but the effort fizzled three years later over concerns about the cost,” KPCC noted. And in Colorado, “voters overwhelmingly rejected a similar proposal last fall amid widespread concerns about the cost,” according to the Mercury News. “Within the first decade, Colorado — a much smaller state than California — would have been $7 billion in the hole,” HotAir observed.

Any program along Lara and Atkins’ lines would need to be built from the ground up, according to rules no legislative body has had to contend with in doing so. “A single-payer system would have to overcome unique hurdles in a state where millions of dollars in federal funds are spent on health programs like Medicaid and treatment for veterans,” ABC News reported[4]. “Other countries, like Canada, may have single-payer systems that differ slightly by state or province, he said, but the U.S. is more complicated. Nothing like this plan — a state-run single-payer system that must also comply with federal government rules — currently exists.”

But public support among California progressives would likely remain high enough to encourage Sacramento Democrats to give a substantive bill a try. “The Legislative Analyst’s Office says the overall cost could be upwards of well over $100 billion,” Atkins recently admitted[5] to KPBS. “But, here’s the difference, since we had those discussions a decade ago, we have implemented the Affordable Care Act in which we’ve looked at the cost and how to take advantage of the numbers. I mean California is the largest state in the country. We have large numbers to put into the risk pool. We put into place the individual mandate and we talked about businesses participating. So this is the next step to put together a financial package of how we can pay for it.”