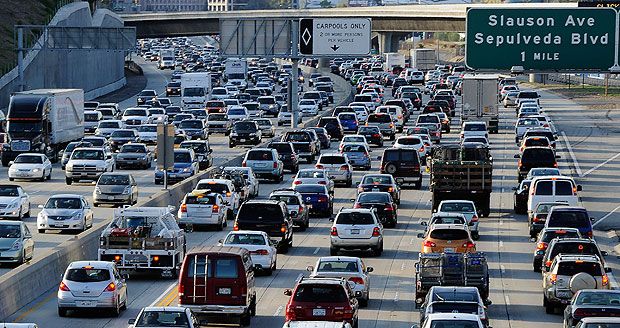 Following a nationwide trend, traffic deaths in California have spiked, alarming analysts and prompting fresh questions about technological distractions like smartphones, and fueling debate over how policymakers can or should respond.

“The report, based on preliminary estimates of traffic fatalities involving motor vehicles on public roads, highways and private property, surprised state traffic safety officials. […] While they have not yet analyzed the numbers, traffic experts pointed to distracted driving and driving under the influence of drugs or alcohol and speeding as leading causes in the spike in deaths.”

Not in a decade have nationwide numbers turned so sour. “Fatalities rose 6 percent in 2016, reaching an estimated 40,200 deaths compared to 37,757 deaths the previous year,” the Associated Press observed[2]. “The last time there were more than 40,000 fatalities in a single year was in 2007, just before the economy tanked. There were 41,000 deaths that year. The increase came as Americans drove more last year – a 3 percent increase in total miles.”

Many drivers, especially younger ones, have appeared to give up on the idea of driving without any tech-fueled distractions. “A recent report from the American Automobile Association says that group of young adults exhibits far more risky behavior behind the wheel than any other age category,” the Rapid City Journal noted[3]. “In a report released this month by AAA, young millennial drivers were found to engage in the riskiest driving behavior of any age group, with 88 percent of 19- to 24-year-olds admitting they had exhibited at least one risky driving behavior in the past 30 days, such as speeding, running red lights or using a cellphone while driving. The report was based on a survey of 2,511 licensed drivers ages 16 and older.”

Fueled by dismaying statistics, California lawmakers have already attempted to crack down on cellphone use in cars on state streets. Assembly Bill 1785, introduced by Assemblyman Bill Quirk, D-Hayward, imposed fines for using unmounted phones in any way for any reason. “Eighty percent of vehicle crashes involve some kind of driver inattention, according to the California Office for Traffic Safety. And up to 3,000 people nationwide are killed in crashes where driver distractions are involved,” Capital Public Radio observed[4]. Quirk’s law “covers all smartphone uses, including mapping applications and music playlists. Existing law already bans drivers from texting and calling unless they use a hands-free device.”

Activists behind the Vision Zero Network, a fatality-reduction campaign adopted by cities including San Francisco, have pushed for lower speeds in municipalities. San Francisco figures diverged from California’s spike upward. “The number of traffic deaths in 2016 was 30, a slight decline from 2015 and 2014 when 31 people were killed in each of those years in motor vehicle collisions,” the Chronicle noted. “The figures also showed a one-year decrease in pedestrian deaths with 16 in 2016 compared with 20 in 2015.”

On the other hand, while some analysts have suggested Vision Zero hasn’t proven adequate to lower fatalities, others have taken the opposite position, questioning whether it has any justifiable purpose in constraining city rules. “Some say cities are using traffic data to justify raking in millions in traffic fines,” the Washington Post reported[5]. “Others contend that the proposals go too far, arguing that lowering speeds too much has a significant impact on travel times. Why, for example, set a 15 mph limit around schools when the facilities are closed, they say.”